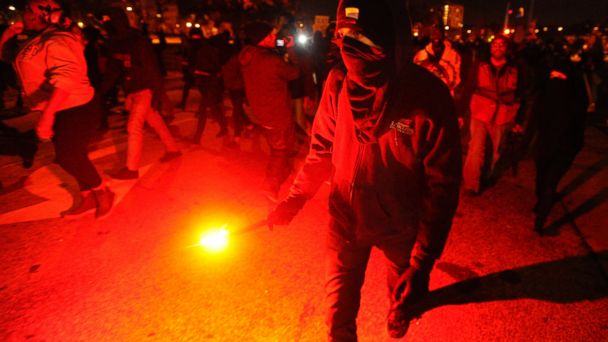 Demonstrators took to the streets across the country for a second night, protesting the decision of a Missouri grand jury not to indict a white police officer in the killing of an unarmed black teenager.

Though crowds were large and police made scattered arrests and closed streets as protesters marched, most of the protests were peaceful.

None of the demonstrations around the country were as violent as those in Ferguson, Mo., where buildings and cars were burned and stores looted after the St. Louis County Prosecutor's Office announced that a grand jury declined to indict Ferguson police Officer Darren Wilson in the killing of Michael Brown.

In New York City, demonstrators started at Union Square at around nightfall, and then marched north to Times Square, meandering between lanes of traffic as police followed. The protesters, who seemed to grow in number as the night wore on, disrupted traffic on the FDR Drive and congregated at the entrances to the Williamsburg and Manhattan bridges and the Queens Midtown Tunnel.

"As long as they remain nonviolent, and as long as they don't engage in issues that cause fear or create vandalism, we will work with them to allow them to demonstrate," he said.

A rally in Minneapolis turned scary when a car struck a protester and then burst through a pack of others who surrounded it. A woman suffered minor injuries.

Several hundred people had gathered Tuesday afternoon near the 3rd Precinct police outpost to show solidarity with Brown. The driver called police soon after to report the incident, and police spokesman John Elder said the incident was under investigation.

Crowds gathered on Martin Luther King Jr. Boulevard at the 110 Freeway briefly, but were stopped by a large police presence. Police prevented people from marching onto the freeway, which they had done Monday night. Marchers then began moving northbound on MLK.

Tuesday's protest created some traffic disruptions, but the crowds were smaller than Monday night, when protesters filled the streets in downtown L.A. and even blocked the 110 Freeway, KABC-TV reported.

Police arrested several demonstrators who sat in the middle of Interstate 44 near the Edward Jones Dome and used pepper spray to disperse the crowd, The Associated Press reported.

Demonstrators swarmed the steps of the federal courthouse, overturning barricades while chanting, "You didn't indict! We shall fight!" the AP reported.

In Oakland, Calif., officials vowed not to allow a repeat of what happened Monday night, when dozens of people threw bottles, broke windows, set small fires and vandalized a police car.

Oakland Police Chief Sean Whent said that 43 people were arrested and three officers were injured, including one who suffered a cut to the head after being hit by a brick.

"We will not tolerate assaults on our staff or vandalism and destruction," he said.

In Cleveland, several hundred people marched down a freeway ramp to block rush-hour traffic, protesting not only the decision in Ferguson but also the fatal shooting Saturday by an officer of 12-year-old Tamir Rice of Cleveland, who had a pellet gun that looked like a real firearm.

"The system wasn't made to protect us," said one of the protesters, 17-year-old Naesha Pierce. "To get justice, the people themselves have to be justice."