FERGUSON, Mo. -- In sweltering heat on Tuesday, there were still some protesters outside in Ferguson, well into the second week of demonstrations and unrest after 18-year-old, unarmed Michael Brown was shot and killed by a white policeman. Brown's funeral is now set for Monday.

Ferguson's leaders urged residents Tuesday to stay home after dark to "allow peace to settle in" and pledged several actions to reconnect with the predominantly black community in the St. Louis suburb where the fatal shooting of Brown has sparked nightly clashes between protesters and police.

"We will not be defeated by bricks and guns and Molotov cocktails," said Missouri Gov. Jay Nixon.

On Tuesday night, Gov. Nixon proclaimed that "a vigorous prosecution must now be pursued" in the killing of Michael Brown. That statement by the
governor seems to presuppose that a crime was committed when officer Darren Wilson shot and killed the unarmed teenager 10 days ago.

A grand jury is to begin hearing evidence Wednesday of whether there is probable cause to believe that a crime was committed.

Every night since the killing, protests demanding the officer's arrest have led to violence.

Seventy-eight people were arrested between Monday and Tuesday, only four were from Ferguson. Seventy-five were arrested for refusal to disperse, two for unlawful use of a weapon, and one for interfering with police. Eighteen of the arrestees were from outside areas, including Chicago, NYC, San Diego, San Francisco, DC, Austin, Huntsville, and Des Moines.

Several Chicagoans were among the many out-of-towners hauled off, including David Rucker, seen on his Facebook page with another protester stating "we both got arrested but we both stood up and that's how you win with peace by fighting for your rights," and this man, Marcus Robinson with his post: "They still out here."

In total, 120 people have been arrested since the August 9 shooting of Michael Brown.

According to a statement from the city, Ferguson's mayor, City Council and other employees have been exploring how to increase the number of African-American applicants to the law enforcement academy, develop incentive programs to encourage city residency for police officers and raise funds for cameras that would be attached to patrol car dashboards and officers' vests.

"We plan to learn from this tragedy, as we further provide for the safety of our residents and businesses and progress our community through reconciliation and healing," the leaders said in the statement Tuesday.

The National Guard arrived in Ferguson Monday but kept its distance from the streets during another night of unrest.

Protesters filled the streets after nightfall Monday, and officers trying to enforce tighter restrictions at times used bullhorns to order them to disperse. Police deployed noisemakers and armored vehicles to push demonstrators back. Officers fired tear gas and flash grenades.

Capt. Ron Johnson of the Missouri Highway Patrol, who is in charge of security in Ferguson, said bottles and Molotov cocktails were thrown from the crowd and that some officers had come under heavy gunfire. At least two people were shot and 31 were arrested, he said. He did not have condition updates on those who were shot. Johnson said four officers were injured by rocks or bottles.

Demonstrators no longer faced the neighborhood's midnight-to-5 a.m. curfew, but police told protesters that they could not assemble in a single spot and had to keep moving. After the streets had been mostly cleared, authorities ordered reporters to leave as well, citing the risk from the reported gunfire.

A photographer for Getty Images was arrested while covering the demonstrations and later released. Two German reporters were arrested and detained for three hours. Conservative German daily Die Welt said correspondent Ansgar Graw and reporter Frank Herrmann, who writes for German regional papers, were arrested after allegedly failing to follow police instructions to vacate an empty street. They said they followed police orders.

Johnson said members of the media had to be asked repeatedly to return to the sidewalks and that it was a matter of safety. He said in some cases it was not immediately clear who was a reporter but that once it was established, police acted properly.

Citing "a dangerous dynamic in the night," Johnson also urged protesters with peaceful intent to demonstrate during the daytime hours.

The latest clashes came after a day in which a pathologist hired by the Brown family said the unarmed black 18-year-old suffered a bullet wound to his right arm that may indicate his hands were up or his back was turned. But the pathologist said the team that examined Brown cannot be sure yet exactly how the wounds were inflicted until they have more information.

Witnesses have said Brown's hands were above his head when he was repeatedly shot by an officer Aug. 9.

The independent autopsy determined that Brown was shot at least six times, including twice in the head, the family's lawyers and hired pathologists said.

The St. Louis County medical examiner's autopsy found that Brown was shot six to eight times in the head and chest, office administrator Suzanne McCune said Monday. But she declined to comment further, saying the full findings were not expected for about two weeks.

A third autopsy was performed Monday for the Justice Department by one of the military's most experienced medical examiners, Attorney General Eric Holder said.

Holder was scheduled to travel to Ferguson later this week to meet with FBI and other officials carrying out an independent federal investigation into Brown's death.

The Justice Department has mounted an unusually swift and aggressive response to Brown's death, from the independent autopsy to dozens of FBI agents combing Ferguson for witnesses to the shooting.

In Washington, President Barack Obama said the vast majority of protesters in Ferguson were peaceful, but warned that a small minority was undermining justice. Obama said overcoming the mistrust endemic between many communities and their local police would require Americans to "listen and not just shout."

Obama said he also spoke to Missouri Gov. Jay Nixon about his deployment of the National Guard in Ferguson and urged the governor to ensure the Guard was used in a limited way.

Brown family attorney Benjamin Crump said Brown's parents wanted the additional autopsy because they feared results of the county's examination could be biased. Crump declined to release copies of the report.

"They could not trust what was going to be put in the reports about the tragic execution of their child," he said during Monday's news conference with forensic pathologist Shawn Parcells and Dr. Michael Baden, who has testified in several high-profile cases, including the O.J. Simpson murder trial.

The second autopsy, Crump said, "verifies that the witness accounts were true: that he was shot multiple times."

Parcells, who assisted former New York City chief medical examiner Baden during the private autopsy, said a bullet grazed Brown's right arm. He said the wound indicates Brown may have had his back to the shooter, or he could have been facing the shooter with his hands above his head or in a defensive position across his chest or face.

"We don't know," Parcells said. "We still have to look at the other (elements) of this investigation before we start piecing things together."

Less than four miles from Ferguson, there was another police shooting Tuesday afternoon, a 23-year-old man who allegedly robbed a convenience store of two energy drinks. Police say he had a knife and came at them when two officers opened fire. 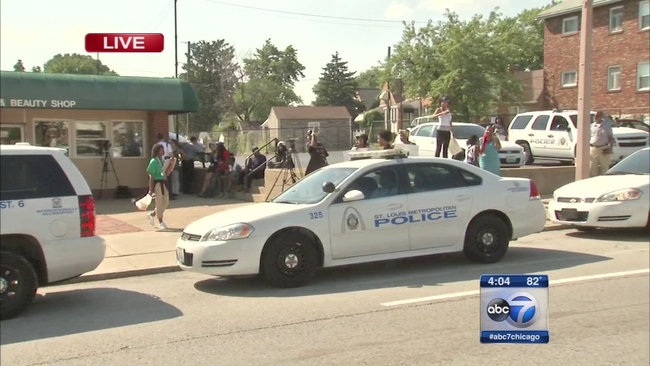 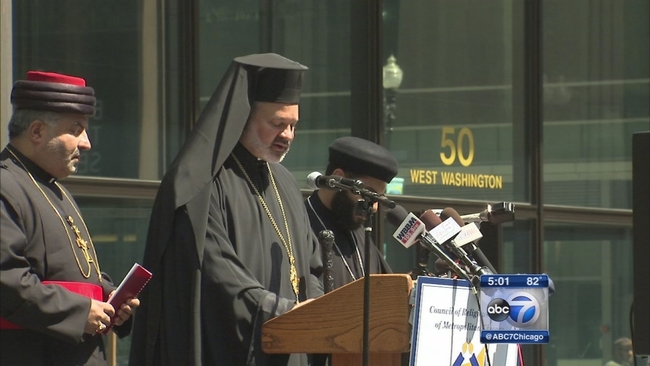 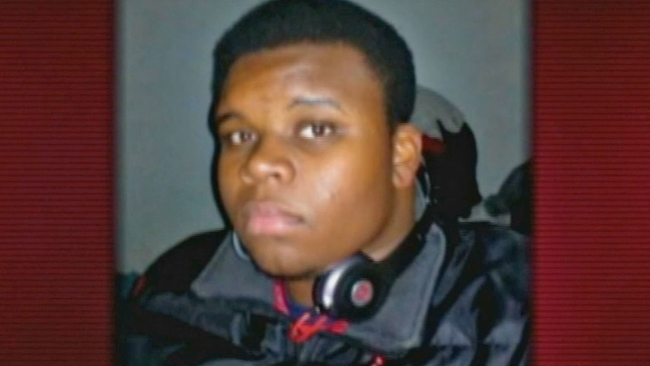