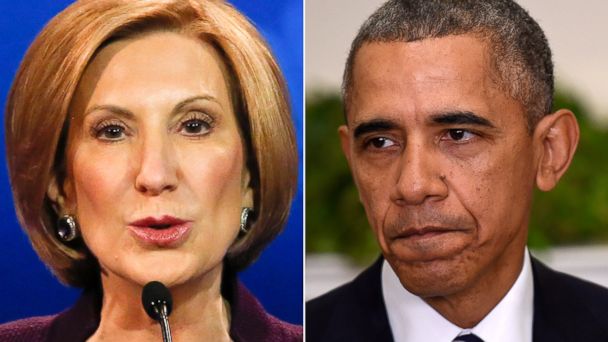 "He doesn't want this country to get ahead," the man said to Fiorina as she shook hands with a group of mostly undecided voters at Foodee's restaurant in Milford. "He doesn't. He's a Muslim. He's a black Muslim."

"Well, uh, it's time to do something different in many ways," Fiorina said before moving on to shake the hand of the next prospective voter.

President Obama has said repeatedly that he and the first lady are practicing Christians.

Before that, Fiorina agreed with the same man on his assessment that Obama is a "dictator."

"Anybody other than the dictator we got up there," the man said to Fiorina, referring to Obama.

"Yeah, today he just rejected the Keystone Pipeline and not that we're surprised," Fiorina said.

Addressing the man's remark in an interview on Fox News Friday night, Fiorina said that she has said on numerous occasions that she does not question President Obama's Christian faith.

"I said on many occasions that President Obama tells me he's a Christian, I take him at his word," Fiorina said.

The White House declined to comment when contacted by ABC News.