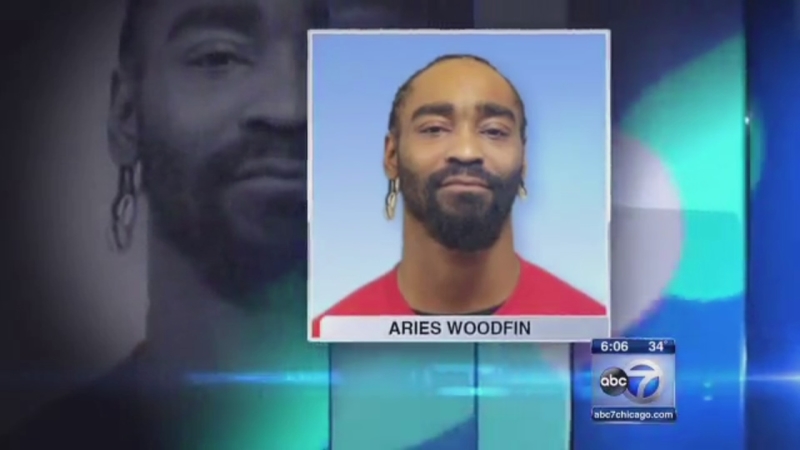 FORD HEIGHTS, Ill. (WLS) -- A suburban man was arrested on weapons charges after online threats led police to search a home where officials say they found a homemade gun range and rounds of ammunition.

Aries Woodfin, 33, appeared in court Saturday. He has not been charged with making threats to police, but that is what led investigators to him.

In court Saturday, prosecutors painted a picture of an angry man who used Facebook to threaten the lives of police officers. A judge agreed, calling Woodfin a dangerous man.

Charged with weapons possession, assault, having a firearm without a valid permit and disorderly conduct, Woodfin was denied bond and will for now remain in Cook County Jail.

Prosecutors say they became aware of the threats on Dec. 8 when Woodfin posted a Facebook message in which he said he was "going to kill cops and innocent white kids." They say someone viewed the message and called police.

Woodfin was arrested Friday after a search warrant was executed at a Ford Heights home Woodfin is said to have lived at. Prosecutors say police found a gun with several rounds of ammunition and a homemade shooting range found in the basement.

Sources tell ABC7 Eyewitness News that Woodfin was taken into custody at a different address in Sauk Village.

At least one person who knows Woodfin well disputed the charges against him.

Beatrice Franklin, the owner of the Ford Heights home that police searched, says Woodfin sometimes stayed there but that it was not his home.

"That gun that they found belonged to me," Franklin said. "I am a licensed FOID card holder and I have paperwork stating that it's mine. So no, it's not his."

Franklin, who has known Woodfin for over 15 years, said she saw at least a couple of his Facebook posts before the page was taken down. She says he was just expressing anger in the aftermath of the grand jury decisions in both Ferguson and New York, where white police officers were not charged after killing unarmed black men.

"He was speaking his mind," she said. "He was expressing how he felt, which is what everyone else was doing on Facebook as well, expressing themselves. They were ranting and they were raving."

Woodfin has a previous weapons charge, aggravated unlawful use of a weapon and illegal gun possession dating back to 2000. He was given probation for those offenses.

His next court date is in January.