The mayor's longtime ally and chief of staff will lead the nation's third-largest school district, which is grappling with a more than $1 billion budget shortfall, a pension monster and an expired teachers' contract.

"Today, we are writing the next chapter of the story of Chicago Public Schools," Emanuel said.

Emanuel also announced that Frank Clark, a former ComEd executive, will take over as the new chairman of the CPS Board of Directors, replacing David Vitale. Also, Janice Jackson, a CPS network schools chief and former principal, will be chief education officer, a newly created position.

Allies view Claypool as a bureaucracy streamliner who is equipped to navigate the political quagmire in Springfield.

"He has proven to be unique with a set of skills in public service," Emanuel said.

"I said 'Run Forrest Run' away from this. This would be a mistake for you," Lewis said.

She said she believes a CEO with no education background is a bad idea.

"It's been tried before and didn't work," she said.

The union regards Claypool as a political fixer in a job that Lewis calls "undoable." However, she said the union can work with anybody. The CTU's bigger criticism is for Clark, who oversaw the school closings effort.

"The task before us, while difficult, is not unachievable," he said.

"What we have right now are two people with the expertise in both domains necessary to lead this district," Jackson said.

CPS has been without a permanent CEO since June, when Barbara Byrd-Bennet resigned amid a federal investigation into a $20.5 million no-bid contract awarded by the school board to her previous employer. She resigned from her $250,000-a-year post on June 1, after taking a paid leave of absence in mid-April.

The mayor did not say Thursday who would replace Claypool as his chief of staff at City Hall.

Claypool took over as chief of staff for Emanuel in April. He served in the same capacity for two terms under former Mayor Richard M. Daley. Claypool, a former Cook County Commissioner, previously served as president of the Chicago Transit Authority and superintendent of the Chicago Park District.
Related topics:
chicagorahm emanuelcpspoliticschicago park districtcta
Copyright © 2021 WLS-TV. All Rights Reserved.
RELATED 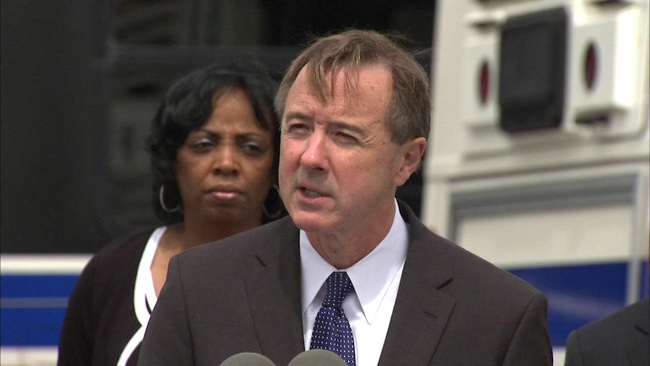