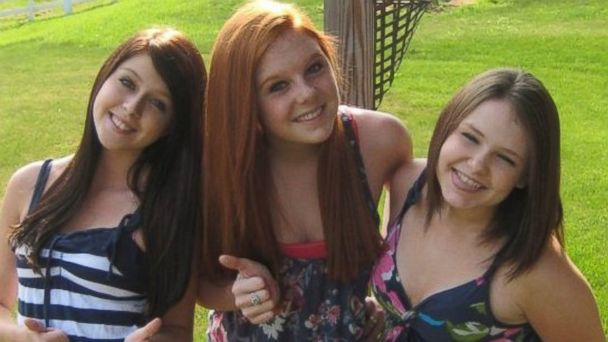 Living in Morgantown, West Virginia, the then-16-year-olds were pretty and sociable, taking selfies and spending time together. Shown here in this Facebook photo together is Neese on the right, Eddy on the left, and Shoaf in the middle.

But everything changed on July 6, 2012, when Neese's parents discovered she was missing. Six months later, Shoaf told authorities that she and Eddy had stabbed their best friend Neese to death.

In a look back at how a friendship ended in murder, here is a timeline of events leading up to and after Skylar Neese's death.

At 16, Skyler Neese was thriving, according to her parents. Neese had a 4.0 grade point average, a part-time job at a fast food restaurant and an active social life.

She was Dave and Mary Neese's only child.

"Skylar was a very bubbly person," Dave Neese told ABC News' "20/20." "She was also very loyal to her friends, the people she thought was her friends."

"She was like a part of our family. She really was," Dave Neese said. "I mean, just like one of our kids."

While entering her freshman year in high school in September 2010, Eddy met Rachel Shoaf. The next month Eddy transferred to the same high school as Skylar Neese, and Shoaf also soon became friends with Skylar Neese.

Before long the three teens began to argue among themselves.

On July 5, 2012, Skylar Neese went home after finishing a shift at work.

The next morning, her dad said he discovered that she didn't sleep in her bed. He later found her window screen in her closet and a hidden bench that she could use to climb in and out of her window.

Later that day, Sheila Eddy called Skylar Neese's parents to tell them what had happened the night before.

Eddy said she and Rachel Shoaf had picked up Skylar Neese at around 11 P.M. and dropped her back off at home before midnight.

On the Neese's apartment's surveillance camera, a car is seen pulling up to the apartment at 12:30 A.M.

At 12:35 A.M., the grainy video shows Skylar Neese sneaking out of her room and slipping into the car, which drives away.

"I was scared to death. I mean I didn't know where my baby was. It was horrible," said Dave Neese.

Two days later, the public learned that Skylar Neese was missing through television, radio and internet coverage. As weeks passed, the investigation into Skylar Neese's disappearance contPolice believed the most likely scenario was that Skylar went to a house party and overdosed.

Corporal Ronnie Gaskins told "20/20" he heard rumors that Skylar Neese had supposedly overdosed on heroin. "She died. People there panicked, and they disposed of the body," said Gaskins.

Jessica Colebank, who was working on the case, found Shelia Eddy's demeanor suspicious when she went to speak to her for the first time.

"Just complete blank on emotions and there was absolutely nothing. It was like iced over," Colebank told "20/20."

Colebank also thought Rachel Shoaf was very nervous when she first spoke to her.

"Their stories were verbatim, the same. No one's story is exactly the same, unless it's rehearsed," Colebank said. "Everything in my gut was, 'Sheila is acting wrong. Rachel is scared to death.'"

After viewing surveillance video and cell phone records that prove Shelia Eddy and Rachel Shoaf were lying about what happened the night they last saw Skylar Neese, police tell Dave and Mary Neese that Eddy and Shoaf had a secret.

Dave and Mary Neese, classmates and even strangers put pressure on Eddy and Shoaf to tell the truth.

On Dec. 28, 2012, Rachel Shoaf had a nervous breakdown and was committed to a local psychiatric hospital, where she had no contact with Shelia Eddy.

After being discharged from the hospital on Jan. 3, 2013, Shoaf confessed to her attorney and police that she and Eddy stabbed Skylar Neese to death.

"We never encountered anything that led us to believe that these two girls conspired with one another to commit premeditated murder," Corporal Ronnie Gaskin said.

The car that Skylar Neese was seen getting into was determined to be Shelia Eddy's.

After her confession, Shoaf agreed to lead police to the site of the murder to try to find Skylar Neese's body.

Shoaf talked with Eddy while wearing a microphone, but Eddy failed to incriminate herself.

With the discovery of Skylar Neese's body and that the blood found on Eddy's car was Skylar Neese's, police had enough evidence to arrest Eddy and Shoaf.

"We asked Rachel, 'Why did you guys kill Skylar?' And her only answer to that was, 'We just didn't like her,'" State Police Corp. Ronnie Gaskin said.

Rachel Shoaf turned herself into authorities at the Monongalia County Circuit Court on May 1, 2013.

Shoaf, now 18, was transferred to criminal court in closed hearing and was charged as an adult. She pleaded guilty to second-degree murder and is incarcerated at the Northern Regional Juvenile Detention Center in Wheeling, West Virginia.

She faces 30 years in prison and will soon be transferred to adult prison.

Also on May 1, Shelia Eddy, now 18, was arrested in a restaurant parking lot.

She was charged as an adult, pleaded guilty and was sentenced as an adult to life in prison with the possibility of parole in 15 years.

"They're both sickos, and they're both exactly where they need to be: away from civilization, locked up like animals. Because that's what they are, they're animals," said Dave Neese.

In memory of their daughter, Dave and Mary Neese helped pass Skylar's Law in West Virginia. It requires Amber Alerts for all missing children, not only those believed to have been kidnapped.

To honor their daughter, Dave and Mary transformed the site of her murder into a memorial. Dave often makes the 20-mile drive.

"But I wanted to take the horrible thing that happened here and try to turn it into something good -- a place that people can come and remember Skylar and remember the good little girl that she was, and not the little beast that they treated her like."