As many as 1,500 animals are still inside the Ripley Aquarium
AP 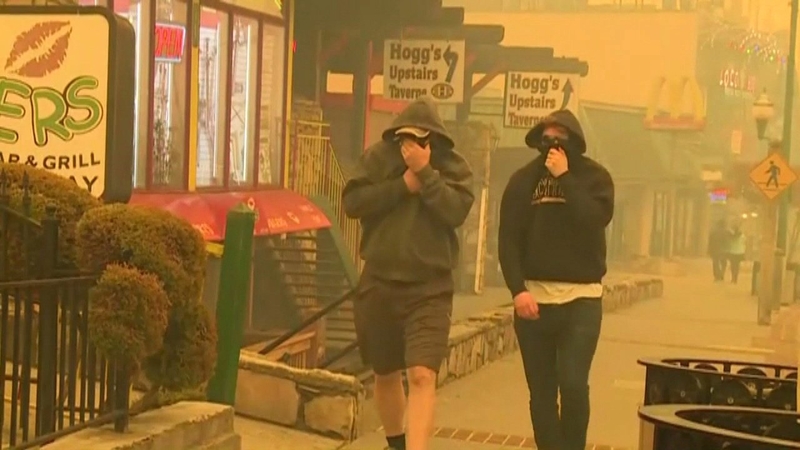 PIGEON FORGE, Tennessee -- With flames dripping from tree branches like lava and the air filled with embers, thousands of people raced through a hell-like landscape as they fled from wildfires that killed three people and destroyed hundreds of homes and a resort in the Great Smoky Mountains.

Fanned by hurricane-force winds, the flames reached the doorstep of Dollywood, the theme park named after country music legend and local hero Dolly Parton. But the attraction was spared any significant damage.

The fires spread quickly on Monday night, when winds topping 87 mph whipped up the flames, catching residents and tourists in the Gatlinburg area by surprise. Police banged on front doors and told people to get out immediately. Some trekked 20 minutes to catch lifesaving rides on trolleys usually reserved for tours and wedding parties.

Wildfires in the Great Smoky Mountains have burned 100 homes and caused thousands of evacuations.

"There was fire everywhere. It was like we were in hell. Hell opened up," said Linda Monholland, who was working at Park View Inn in Gatlinburg when she and five other people fled on foot. "Walking through hell, that's what it was. I can't believe it. I never want to see something like that again in my life, ever."

In all, more than 14,000 residents and tourists were forced to evacuate the tourist city in the mountains, where some hotspots persisted and a curfew was planned for Tuesday night.

No details on the deaths were immediately available. More than a dozen people were injured.

The winds calmed and rain fell on some of the fires early Tuesday, but officials were worried that fire could spread again by evening, with forecasts calling for winds up to 60 mph.

"We have not been able to get in all of the areas," Miller said. "We pray that we don't experience any more fatalities, but there are still areas that we are trying to get to" because of downed trees and power lines.

Photos of the Gatlinburg area showed scorched cars and buildings and soot-covered debris scattered across roads. A smoky haze hung in the air, obscuring picturesque fall views of the mountains awash in red, yellow and gold leaves.

Though wildfires have been burning for several weeks across the drought-stricken South, Monday marked the first time any homes and businesses were destroyed on a large scale.

The wildfires spread when winds blew trees onto power lines, sparking new fires and shooting embers over long distances. Hundreds of homes and other buildings, including a 16-story hotel, were damaged or destroyed.

Emergency officials ordered evacuations in downtown Gatlinburg and Pigeon Forge and in other areas of Sevier County near the Great Smoky Mountains.

About 1,200 people took shelter at the Gatlinburg Community Center and the Rocky Top Sports Park, an 80-acre sports facility-turned-shelter.

Tammy Dillon had just come home from work when police banged on her door around 9:30 p.m. Monday. She said she drove through a fiery scene to get to Rocky Top Sports World, where she spent the night in a car.

"We drove through flames, over hot embers in the road. It was awful," Dillon said.

In downtown Gatlinburg, workers at Ripley's Aquarium of the Smokies left behind more than 10,000 fish and other animals. Police escorted a team of marine biologists and life support experts back into the aquarium Tuesday, and the animals were doing fine, Ripley's said in a news release.

Although Dollywood was not damaged, but more than a dozen cabins operated by the park were.

Dollywood suspended operations through at least Wednesday. Its DreamMore resort will be open on a limited basis as a shelter and for registered guests.

Just hours before the fires spread, the singer appeared in a 30-second video released by the Great Smoky Mountains National Park, telling people to avoid burning leaves and parking vehicles on dry grass and warning that even a campfire can spark a wildfire.

Parton said in a statement Tuesday that she was heartbroken.

"I am praying for all the families affected by the fire and the firefighters who are working so hard to keep everyone safe," Parton said in a statement. "It is a blessing that my Dollywood theme park, the DreamMore Resort and so many businesses in Pigeon Forge have been spared."

In the mid-1980s, Parton partnered with the Herschend family who ran the park, then known as Silver Dollar City. It opened under the new name of Dollywood in 1986.

Rain forecast for much of Wednesday should help the area after weeks of punishing drought, but the bone-dry ground should soak up the moisture quickly, forecasters said. Rainfall amounts have been 10 to 15 inches below normal during the past three months in many parts of the South.

Patrick Sours, who lived with his family in a Gatlinburg motel that was probably destroyed, said he doesn't think reality has set in for most people.