An ABC 7 Eyewitness News Exclusive
WLS
By Sarah Schulte, Eric Horng and Laura Podesta
HAMMOND, Ind. (WLS) -- Dramatic cell phone video shows the aftermath of a crash that killed a 13-year-old girl and critically injured her grandmother when their car was struck by an SUV that was fleeing East Chicago and Hammond police on Wednesday after a theft of beer.

East Chicago police said in a statement that the suspects did not just steal beer, but also ignored orders and, in trying to get away, nearly injured an officer.

The girl has been identified as 13-year-old Julianna Chambers of Whiting, Ind. She was on her way home from the doctor with her 57-year-old grandmother in a Chevy Equinox when it was T-boned by a Dodge Durango being chased by East Chicago police into Hammond at about 5 p.m., police said. Hammond police joined the chase after the cars crossed into their jurisdiction.

State police said the Dodge ran a red light and hit the driver's side of the Equinox in the intersection of Gostlin and Columbia Avenue.

In the cell phone video, the vehicles are left crumpled and several yards from the point of impact. The driver tries to make a run for it, but doesn't get far.

State police said the driver of the Equinox, 57-year-old Theresa Paramo of Whiting, Ind., was taken to North Lake Methodist Hospital in critical condition and then airlifted to Christ Hospital in Oak Lawn. Her granddaughter was taken to Saint Margaret's Hospital in Hammond, where she died.

On Thursday, East Chicago police revealed the chase began when suspects Donnell Howard, of Highland, and Jessica Pichon, of East Chicago, tried to run from police after Pichon was caught stealing a case of beer from a store. Police say an officer approached Pichon as she fled into the waiting vehicle with the stolen beer, then Howard, the driver, peeled out of the parking lot with the officer still hanging from the passenger's side door.

Howard was uninjured in the crash, and Pichon was treated for minor injuries. They are both in police custody.

"I want my son to pay whatever price he has to pay for what he did, but that could have been avoided. Why did you chase him?" said Howard's mother, who did not wish to be identified.

Hammond's mayor expressed surprise that police would give chase to shoplifters.

"If you're going to have a high speed chase it should be over some felony, or the public's in danger. A case of beer?" Mayor Tom McDermott said, shaking his head.

McDermott has now ordered a review of police actions.

"Sometimes you've got to let the bad guy get away. And I think this is one of those times, I personally do," he said.

Howard's mother said the chase was unnecessary because her son was well known to police as the town vagrant, arrested numerous times for petty crimes and known to sleep in the parking lot of the library.

"The whole police department knows how to contact Donnell. All they got to do is find the truck, and the truck is usually right there in East Chicago at the library," she said.

Julianna was a 7th grader at Whiting Indiana Middle School, a stellar student and beloved daughter and granddaughter, according to her family and friends.

"She was a good kid in school, I loved her to death. How great she was, you know - she was my pride and joy, she was a part of my heart and I needed people to know they took an innocent kid," said Norma Chambers, Julianna's paternal grandmother.

State and local police have not said why they were pursuing the Durango, but said charges are pending. A relative of the victims said the chase was related to shoplifting.

"I think it was ridiculous for these kids to go out and rob a store just to get booze, just so they can like party," Norma Chambers said.

Police said they took the 31-year-old driver of the Durango into custody. His 27-year-old passenger was taken to the hospital for minor injuries.

The injured 57-year-old grandmother is in much worse shape, suffering a broken wrist and fractured ribs. 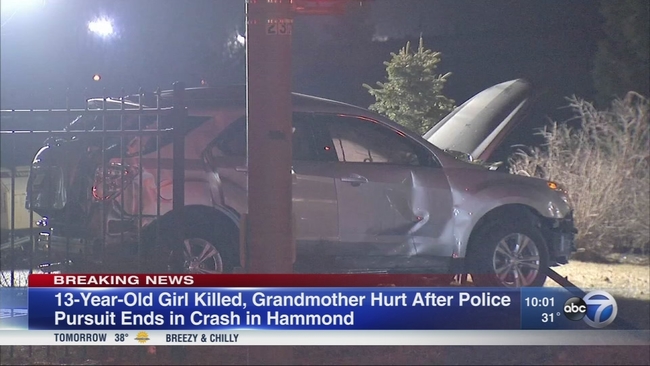