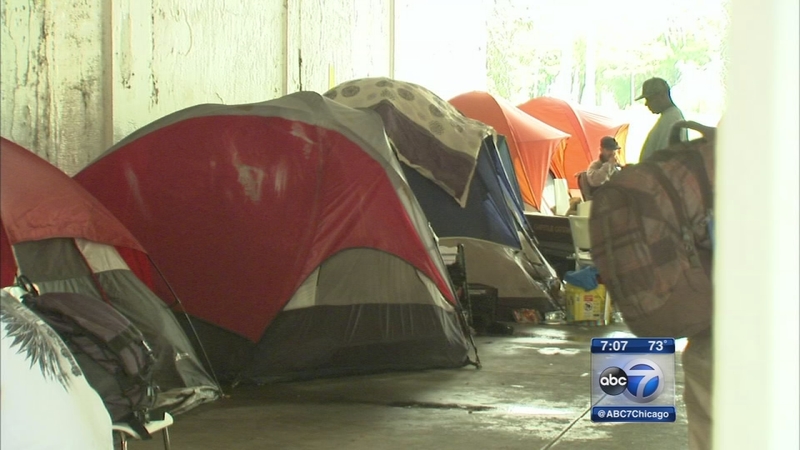 CHICAGO (WLS) -- A group of homeless people living under viaducts in the city's Uptown neighborhood are worried that the city will take away their tents.

If the city takes action, residents in the tent cities along Lake Shore Drive said they don't know how they will survive the winter months.

"We consider that a very basic minimum of protection," said Mark Saulys, a tent city resident, who has been homeless since February. He said their tents have been tagged for removal.

She told them a final decision about the tents has not been made. No tents will be removed right now, but the city will revisit the issue after Oct. 14.

"Do we not feel very strongly about helping homeless individuals? Yes, we do. But there are also residents who would like to be able to walk under the viaduct," Morrison-Butler said.

However, Morrison-Butler said the weekly cleanings underneath viaducts at Irving Park, Wilson, Lawrence, and Foster will continue. The cleanings require the homeless to temporarily relocate all of their possessions.

Some residents said it's harassment.

"Let's hope for the best because I try to practice good faith," said Maria Murray, who lives in one of the tent cities.

As part of city pilot programs to relocate residents, roughly half of the 75 viaduct dwellers now have housing.

However, advocates for the homeless said a lot of others have nowhere else to go or have good reasons for staying put.

"A lot of people have been kicked out of homeless shelters that are closing, have lost other social support services trying to help them advance," said Diane O'Connell, of the Chicago Coalition for the Homeless.

Among those who could be in jeopardy is Loydell Roberson, 62, who was doing his laundry near his tent on Wednesday. He is battling lung cancer and is just holding on until things get better, he said.