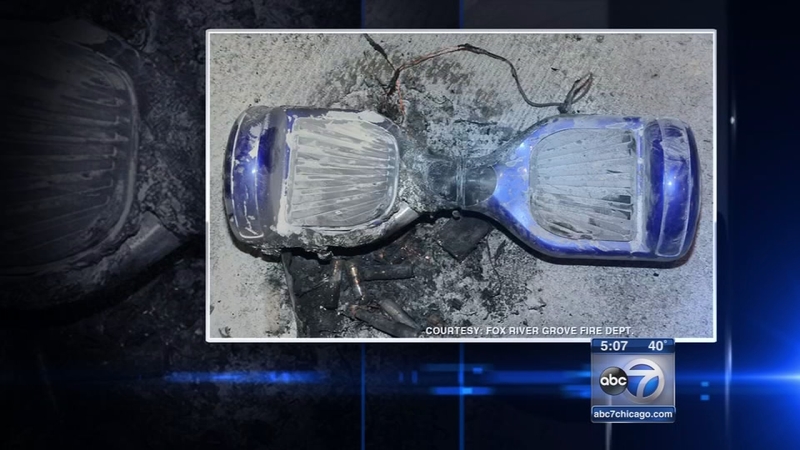 FOX RIVER GROVE, Ill. (WLS) -- Crews are cleaning up after a hoverboard caught fire in a home in suburban Fox River Grove.

Officials say the hoverboard was in the living room of the home, located in the 500-block of Essex, when it caught fire around 4:45 a.m. Friday. The family said they awoke to a popping sound and the smell of smoke.

"After the popping noise the smoke detectors went off, they went down to investigate, they saw the unit on fire," said Chief Robert Kreher, Fox River Grove Fire Department.

The family was able to put out the fire with an extinguisher before crews arrived. Investigators say the self-balancing scooter, made in Hong Kong, was charging at the time of the fire.

"I would say be very cautious when you're charging those. I would not charge it in my house and I would not leave it unattended," Kreher said.

A federal probe is underway after hoverboard fires across the country. The popular gadgets have been banned by dozens of airlines and colleges because of fire concerns.

"You can sue, although individual lawsuits for a $200-300 product aren't very cost-effective," said Antonio Romanucci, an attorney. "I see the possibility of class actions coming about here."

His best advice is to think twice before buying one.

"The number one remedy, in my opinion, should be to return the product if it hasn't been defective yet. Wait until it gets more advanced, wait until it gets better produced," Romanucci said.

No one was injured in the Fox River Grove fire and damage to the home was minor, officials said.

The fire chief says that while this is the first hoverboard-related fire call for his department, it probably won't be the last.