How did former Rep. Aaron Schock get on the House floor? 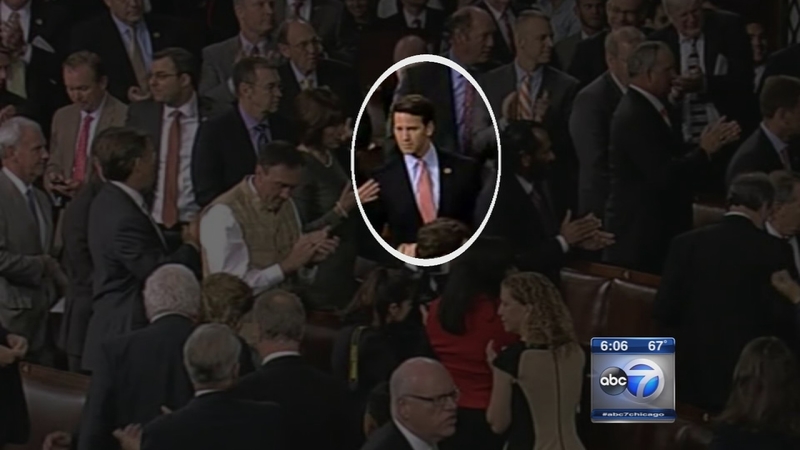 The ABC7 I-Team is investigating how an Illinois congressman--who resigned in disgrace--managed his way onto the house floor Wednesday.

That's where we found ex-Congressman Aaron Schock, who is the subject of a federal financial fraud investigation.

House Speaker Paul Ryan had invited the Indian prime minister to the hill...but it was this guest who had a seat on the aisle that caused some jaws to drop.

Former Illinois Congressman Aaron Schock, wearing an official house pin, just like the old days before he resigned in March 2015.

One of the last times Schock was seen in the U.S. Capitol it was defending his Downton Abbey designer congressional office, which led to questions about his campaign and official spending, and the political dominoes began to fall for one of the Republican party's rising stars.

Fast forward to Wednesday--even though Schock is still under federal investigation, there was nothing nefarious about his appearance on the hill according to a spokesman for the law firm representing Schock in the criminal investigation.

The answer to how Schock managed a ringside seat is that "former members of congress retain their floor privileges," according to house officials and the spokesman for Schock's attorneys.

While in Congress he endorsed the Indian prime minister and worked extensively on Indian issues, according to his spokesman.

He also once traveled to New York to introduce the prime minister at a festival. Schock documented the trip on his Instagram. It is among the taxpayer-funded trips with his staff that have come under scrutiny.

Ex-Congressman Schock has been living in southern California and working as a business consultant. The grand jury investigation has been chugging along, with no criminal charges filed...but a regular flow of subpoenas for political and campaign records from Schock and testimony from his former staffers.