How the Ebola Virus Spreads to Humans 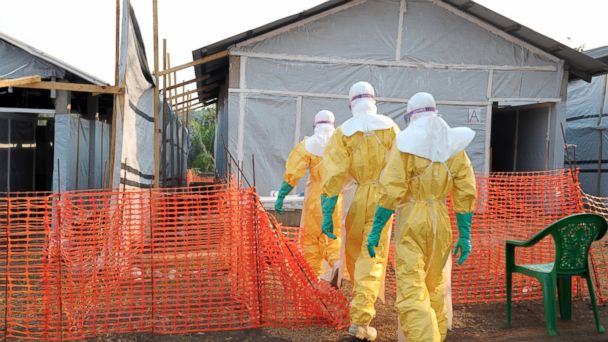 There are so many questions about the true source of the Ebola virus, it is difficult to understand the timeline of the deadly infection.

There are five different strains of the disease, four of which can spread to humans while the fifth only effects primates.

Experts at the Center for Disease Control and Prevention believe that the four strands that effect humans spread largely due to exposure to the blood or bodily secretions of an infected individual.

The Ebola virus was first identified in 1976 in Africa, but how the initial case came to be remains a mystery. The World Health Organization notes that some infected individuals reported having had contact with chimpanzees, gorillas, porcupines or fruit bats who were ill, animals that were later determined to be infected with the Ebola virus.

People now caring for infected individuals - including friends and relatives who may be taking care of infected persons at home or doctors treating the ill in hospitals - are among the most commonly infected. Another major moment of infection, according to WHO, is burial ceremonies if mourners directly contact the corpse.

Symptoms appear anytime between two days and 21 days after infection, meaning that the possible circle of infected bystanders could include a large number of people if the individual doesn't even know that they are a carrier.

Muscle aches, fevers, headaches, diarrhea, vomiting and overall stomach pain are among the most common symptoms, but some patients also noticed a rash, red eyes, and difficulty breathing or swallowing. Once the infection is in the bloodstream, excessive internal bleeding and the ensuing loss of blood leads to death in the majority of cases.

Fatality rates vary by strand and area, but ranges largely between 50 percent to 90 percent mortality rates.

A number of these symptoms overlap with malaria and cholera, which doctors reportedly guess when first treating the patients, creating a serious delay in the proper treatment.

Reston Ebola virus, the fifth strand of the disease, was recorded in Virginia where it spread aerially in a primate research facility in 1990. Researchers were investigating an outbreak of a Simian hemorrhagic fever in monkeys and they discovered the Ebola strand in the primates, but the human handlers did not develop symptoms.

The disease was named after the Ebola River in the northeast of the Democratic Republic of Congo, where researchers believe has connections to the roots of the disease.

All of the known cases involving human infection have been limited to Africa, with reported infections in the Democratic Republic of Congo, Republic of the Congo, Uganda, Liberia, South Sudan, Sierra Leone, Guinea, Gabon and the Ivory Coast. South Africa has only been connected as a result of the disease being imported and there were laboratory contamination cases in England and Russia.