Quality Carriers, owner of leaked acid tanker, had 187 crashes in past 2 years

WLS
By Chuck Goudie
CHICAGO (WLS) -- Wednesday's acid leak on the South Side was more potential danger and a nuisance for motorists, but now city officials are still demanding answers.

Quality Carriers, the owner of the acid tanker, operates a sizable fleet of truck tractors and stainless steel trailers. The company is so big that it received a satisfactory government safety rating even though it has had more than 185 crashes the past two years; more than a dozen of them fatalities.

The company advertises as the largest bulk transportation company in North America, based in Tampa, Fla., with more than 4,100 trucks and 3,300 drivers who drove 220 million miles in 2012.

With that, many vehicles on the road every day, Quality Carriers has its share of wrecks, mishaps and federal inspection issues.

According to federal safety records reviewed by the I-Team from the past two years, Quality Carriers has been involved in 13 fatal crashes; 65 crashes where people were injured and 187 total crashes. The firm's federal safety rating satisfactory.

One recent federal safety violation in February found that Quality Carriers knowingly allowed an employee to operate a commercial motor vehicle even though they had lost their driver's license.

Authorities don't know what caused Wednesday's acid leak, but with traffic disrupted and public safety at risk, they say they intend to find out.

"The truck driver, the owner of the company, we have to inspect them and find out what went wrong here. Somebody has to be held accountable," said Ald. James Balcer of the 11th Ward.

Quality Carriers has trucks in several affiliated transport yards in and around Chicago, but it isn't clear where this vehicle was from or where it was going with the load of muriatic acid.

Among previous federal actions against the company, in June 2010 was a fine for allowing vehicle conditions likely "to cause an accident or a breakdown," and in December 2008, the company was fined for accepting hazardous cargo that could leak.

Investigators say the South Side incident doesn't appear to have been caused by an accident, just a leak from the tanker.

The I-Team has attempted to reach Quality Carriers executives in Tampa and in Chicago, but no one has returned calls or answered emails.
Related topics:
bronzevilleiteamchicago white sox
Copyright © 2020 WLS-TV. All Rights Reserved.
RELATED 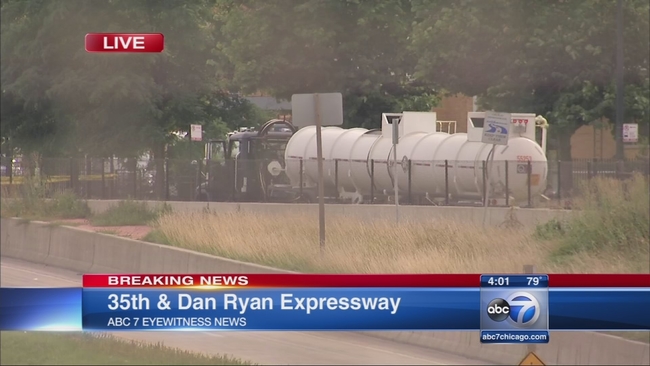