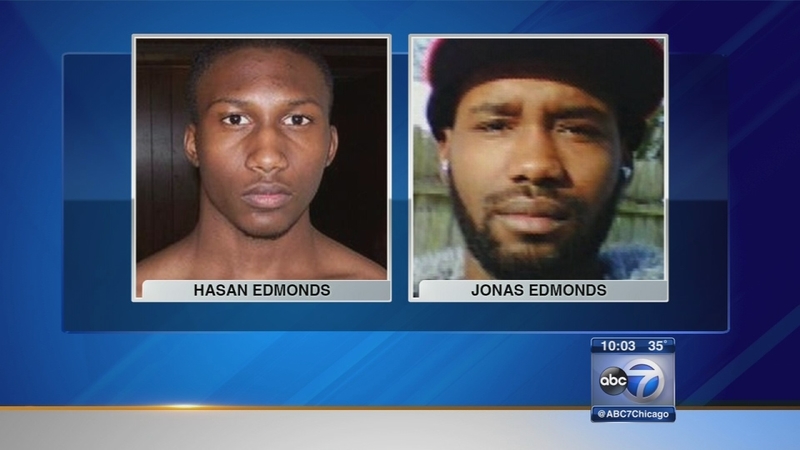 The men were charged Wednesday in U.S. District Court of the Northern District of Illinois with one count of conspiring to provide material support and resources to a foreign terrorist organization.

Jonas Edmonds allegedly devised a plan for Hasan Edmonds to travel overseas and use his military training to assist ISIL, the feds said. But before leaving, the FBI says, the Illinois National Guard member gave his uniform to Jonas so he could wear it to enter a nearby base, and with automatic weapons and grenades, kill as many soldiers as possible.

The cousins allegedly planned on killing as many as 150 people, according to the complaint. The likely target was Joliet Armory, where Hasan had trained. Hasan had participated in a weekend drill training with the National Guard earlier this month.

Federal prosecutors did not comment, but in the complaint alleged Jonas Edmonds told a federal employee about his plans for a local attack, saying: "I can unleash the lion." Prosecutors also alleged in the complaint Hasan Edmonds discussed his plans to go to overseas, saying it is a "duty to support ISIL or to be martyred in the process."

Hasan Edmonds lived with relatives in a modest Aurora home after graduating from West Aurora High School in 2011. If there were warning signs, family members say they didn't see them.

Bates says her brother and their cousin, Jonas Edmonds, had been raised Christian but converted to Islam in recent years. Bates claims Hasan was headed on a leisure trip when he was arrested at Midway Airport.

"That's the dream of everyone. At some point and time, you just want to get up and travel. If that means go east to Egypt, go to Africa, go to China, go to Japan, you want to be able to go somewhere at some point in your life outside of the U.S.," Bates said.

If the two cousins had been radicalized, it seems few knew but the FBI.

"Well, yes, they're well-known here, but not as bad people. We don't have no problems with them. My kids play with them all day. But other than that, they're good people," one neighbor said.

"I'm baffled by the fact they're not even four doors down from us. In our neighborhood, nothing but kids, teenagers, not even a half-block from school. So its, wow, kind of shocking," David Jenkins said.

Minutes from Hasan's house is the Aurora home of Jonas' great aunt, where Jonas lived for a time.

"I believe this is a prejudice just because they choose to worship as Muslims. It does not make them terrorists to the United States," Bates said.

Bates described Hasan and Jonas as introverts who were good-natured and quick to laugh - far different than the portrait painted by federal authorities.

"Throughout the course of this investigation, the defendants were closely and carefully monitored to ensure the safety of the public and our service men and women," FBI Special Agent in Charge Robert Holley said in a statement.

During the investigation, the FBI says undercover agents met with both defendants to discuss their plan of an armed attack against a U.S. military facility in northern Illinois, where Hasan Edmonds had trained.

"According to the charges filed today, the defendants allegedly conspired to provide material support to ISIL and planned to travel overseas to support the terrorist organization," Assistant Attorney General Carlin said in a statement. "In addition, they plotted to attack members of our military within the United States. Disturbingly, one of the defendants currently wears the same uniform of those they allegedly planned to attack."

"We will pursue and prosecute with vigor those who support ISIL and its agenda of ruthless violence," U.S. Attorney Zachary T. Fardon of the Northern District of Illinois said in a statement. "Anyone who threatens to harm our citizens and allies, whether abroad or here at home, will face the full force of justice."

Illinois Gov. Bruce Rauner said he learned of the plot Wednesday night after the arrest.

"I commend the Illinois National Guard and the Federal Bureau of Investigation for working together closely to apprehend this individual and his associates. On behalf of all citizens of Illinois, I thank all the members of our National Guard as well as the FBI for protecting our state and defending our country," Rauner said in a statement.

Conspiring to provide material support to foreign terrorists carries a maximum penalty of 15 years in prison and a $250,000 fine.