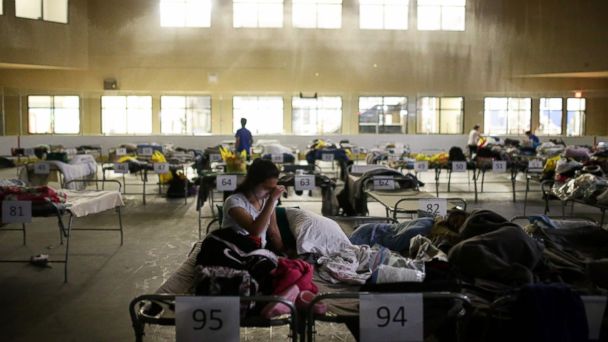 ABCNews
By MALORIE SIMONS
One of the evacuation centers for the wildfires blazing through the Fort McMurray area in Alberta, Canada, has become the epicenter of another crisis: a stomach bug that has made almost 50 people ill within the past 48 hours, authorities said today.

In the Northland Expo Center, one of seven evacuation sites in the region, officials are trying to identify the illness that is spreading, but Dr. Chris Sikora said during a news conference today that the cases "seem to be viral gastroenteritis," and that people are suffering from "nausea, vomiting, and diarrhea." Sikora is the senior medical officer of health in Edmonton.

The wildfire in Fort McMurray started one week ago, and today there are over 600 people taking shelter in the Northland Expo Center, according to Kerry Williamson, senior media relations adviser for Edmonton at Alberta Health Services.

"Most of the time the fires burn [in areas] without a lot of people," Williamson said. "This one was the largest one they have seen in Alberta's history."

The confined spaces and close quarters that characterize evacuation centers can be a recipe for disaster when it comes to containing the spread of infectious illnesses such as norovirus.

"Controlling norovirus outbreaks is very challenging because the virus is incredibly contagious and people can get the infection more than once," said ABC News Chief Health and Medical Editor Dr. Richard Besser. "In temporary shelters in which there is crowding, the challenges are even greater. The virus can spread from person-to-person, from contaminated food or water, and through contact with surfaces with norovirus on them."

In addition to intestinal viruses, respiratory viruses like influenza can also be spread more easily in confined spaces, according to Dr. William Schaffner, an infectious diseases specialist at the Vanderbilt Medical Center.

The U.S. Centers for Disease Control and Prevention provides guidance on ways to limit the exposure and transmission of contagious diseases. Besser, who headed the CDC's public health emergency preparedness and response functions from 2005 to 2009, reiterated the basic principles.

"To control an outbreak, you want to keep people who are sick away from those who are not," he said. "You want to ensure access to hand-washing stations and if that isn't available, alcohol-based hand sanitizers. People with norovirus should not be involved in food preparation. All potentially contaminated surfaces need to be disinfected with a dilute bleach solution."

Sikora emphasized that the Northland Expo center is taking a three-step approach to combating this contagious infection.

"First, we are trying to keep the well people well," he said. "The second step is to help assist and maintain the health of people who are ill. The third is to maintain continuity of business here at the reception center."

Schaffner emphasized that the longer people are together in enclosed spaces, in close proximity, the more likely these outbreaks become. And while these illnesses may not be deadly to most of the population, they are "a more serious threat to the very young, the very old, and for people with underlying illnesses such as diabetes."

Though this fire is the worst the region has ever seen, Sikora emphasized that the people of Alberta "are a resilient bunch, and we will help our staff and public get through this."

Dr. Malorie Simons is a resident physician with the Brown University Department of Internal Medicine. She is a resident in the ABC News Medical Unit.