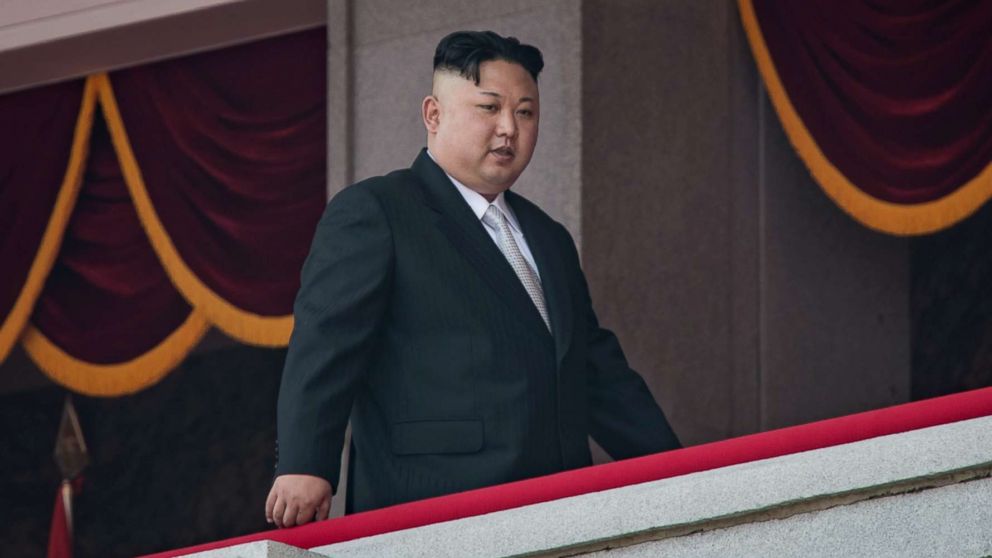 North Korea's Kim Jong Un was briefed by one of his generals on the country's plan to launch missiles toward Guam, according to South Korea's largest news agency, but the combative leader appeared to put the heated rhetoric on pause, saying he would watch "stupid American behavior for a bit longer."

KCNA, the state news agency of North Korea, said in a statement, "Dear supreme leader has spent a long time to review the plan to attack Guam by surrounding it and conferred with the leaders present," according to a translation by the South Korean news agency Yonhap.

On Monday Kim reportedly met with his Gen. Kim Rak Gyom, warning soldiers to stand ready to strike "at all times," according to the Yonhap report.

The order to his army was reportedly followed by more bluster but also a call for the U.S. to ease tensions.

"Dear supreme leader said that the Americans' reckless military confrontational behavior has ended up the U.S. trapping themselves with their own hands and are spending pathetic fate by weary minutes and seconds and that dear supreme leader will watch such stupid American behavior for a bit longer," KCNA said, according to Yonhap.

"The United States, which was the first to bring numerous strategic nuclear equipment near us, should first make the right decision and show through actions if they wish to ease tensions on the Korean Peninsula and prevent a dangerous military clash," Kim was quoted as saying.

When the preparations for battle were complete, Kim took a photo with his soldiers.

U.S. Secretary of Defense James Mattis was asked on Tuesday whether he believed Kim was going to hold off on a missile launch targeting Guam, and what the U.S. would do if such a launch took place.

"Here in the Pentagon, we are part of the sentinels for our nation, and we stand ready to defend it," Mattis replied.

Pyongyang's saber rattling comes a week after the North Korean army declared it will launch four intermediate ballistic missiles near Guam by mid-August. On Aug. 5 the U.N. Security Council passed a resolution imposing sanctions to devastate the country's economy. China announced on Tuesday it will phase out supplying North Korea with crucial coal.

Kim's rhetoric on Monday came shortly after Mattis harshly warned North Korea not to engage in any sort of aggression against the U.S.

"If they shoot at the United States, I'm assuming they've hit the United States ... If they do that, then it's game on," he said.
Report a correction or typo
Related topics:
abc newsnational
Copyright © 2021 ABC News Internet Ventures.
More Videos
From CNN Newsource affiliates
TOP STORIES