WLS
By Jessica D'Onofrio and Ravi Baichwal
NILES, Ill. (WLS) -- A family has filed a lawsuit claiming that their father nearly drowned in a pool where the lifeguards on duty were not paying attention.

Video obtained from the pool security camera at the Leaning Tower YMCA in northwest suburban Niles shows 61-year-old Yosef Bornstein, a doctor of Chinese medicine, swimming laps before having a heart attack.

Attorneys said the video shows Bornstein standing in chest-deep water before going under for over five minutes with two lifeguards stationed within 10 yards of him.

The lawsuit claims the lifeguards were chatting and never scanned the pool. After Bornstein was under for more than five minutes, a swimmer in another lane noticed him unconscious and underwater.

Bornstein, who moved to Evanston from Israel years ago, was recently released from the hospital. His family said he is able to speak and walk but may have long-term brain injuries. Bornstein's doctors have not confirmed this information.

"This is very difficult for my family and I," said Elisha Bornstein. "It's really a miracle that my father is alive and that he is able to talk to some extent...we need to get to the bottom of everything."

Thursday, the Bornstein family announced they are filing a lawsuit accusing the Leaning Tower YMCA and the two lifeguards of negligence for not noticing that Bornstein was in distress and underwater, and not immediately pulling him out of the water to give him emergency assistance.

"We're going to find out why this happened, did the YMCA not have the proper protocols and training in place or were the lifeguards properly trained and just not doing their job that day," said Timothy Cavanagh, the family's attorney.

YMCA of Metro Chicago released a statement on Thursday:

"The lifeguards were immediately put on administrative leave and a disciplinary review is underway. Further, we continually review our policies and procedures to reflect YMCA of the USA best practices."
Report a correction or typo
Related topics:
nilesdrowningpoolheart attacklifeguard
Copyright © 2021 WLS-TV. All Rights Reserved.
LIFEGUARD 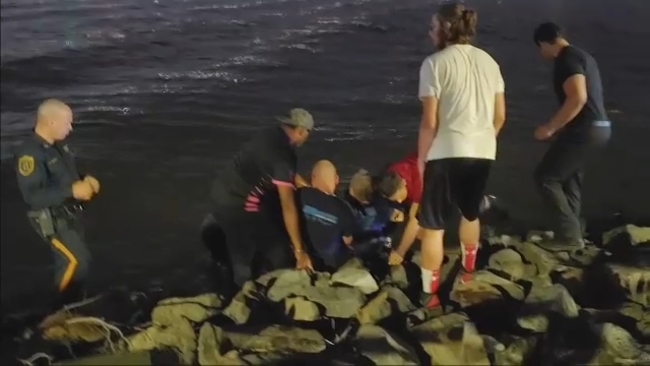 Lifeguard takes off prosthetic leg to save driver as car sinks

Lifeguards capture shark with their bare hands at CA beach