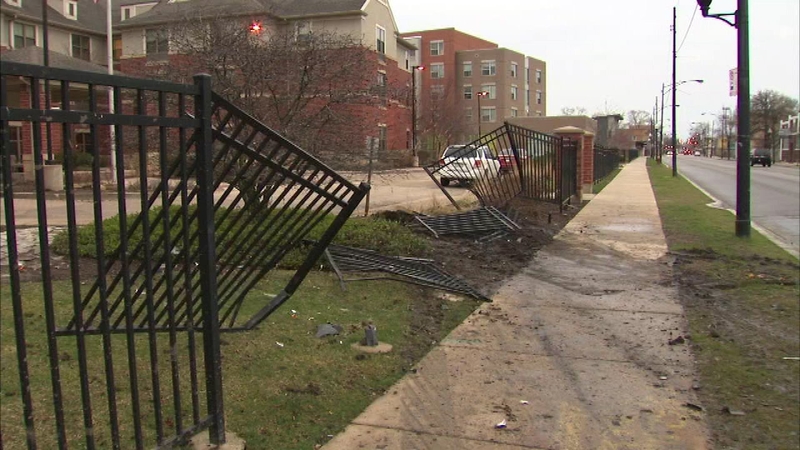 CHICAGO (WLS) -- A 66-year-old man killed late Monday night after a Chicago police SUV slammed into his car was identified Tuesday. The Independent Police Review Authority is investigating the Far South Side crash.

The man was identified to the Cook County Medical Examiner's Office as Jack Burris, of the 8500-block of South Wabash Avenue. He lived about three miles from where the deadly crash occurred. A red balloon marked the spot Tuesday.

Burris was driving a 1998 Honda coupe. An unmarked CPD squad struck the Honda near the intersection of South Michigan Avenue and East 105th Street in Chicago's Roseland neighborhood around 10:40 p.m. Neighbors said they heard the crash blocks away.

Terrell Stovall, who witnessed the crash, said the police SUV blew a stop sign and was going about 80 miles per hour. The fence surrounding a senior living home was smashed by the impact.

Police said tactical officers from the 5th District were responding to a call of shots fired and had their emergency equipment activated. CPD Chief Spokesperson Anthony Guglielmi said the vehicle was equipped with a black box and that box indicated lights and sirens were on at the time of the crash. Stovall said the sirens were activated last minute.

"The lights were on, but the sirens came on after they - right before they blew the stop sign," Stovall said.

Stovall said the Honda came to a complete stop at a sign before proceeding through the intersection. He said he believes police could have prevented the crash.

"If they weren't going so fast. Plus, it was slick outside. If you weren't going too fast, if it wasn't raining, they could have avoided this whole accident. Or stopped at the stop sign how they're supposed to and made sure it was clear before they moved through it," Stovall said.

Burris was rushed to Advocate Christ Medical Center in south west suburban Oak Lawn, where he died at 11:24 p.m.

"He was a caregiver for his mother. He was a family man. He was an all-around great guy. He was, he was," said John Mitchell, Burris' friend.

Two officers were treated for minor injuries at Little Company of Mary Hospital in south suburban Evergreen Park and released. They were placed on administrative duty for 30 days, police said.

"I'm not going to say... place any blame on the police, who reacted to a call or anything like that. It's just a tragic situation," Mitchell said.