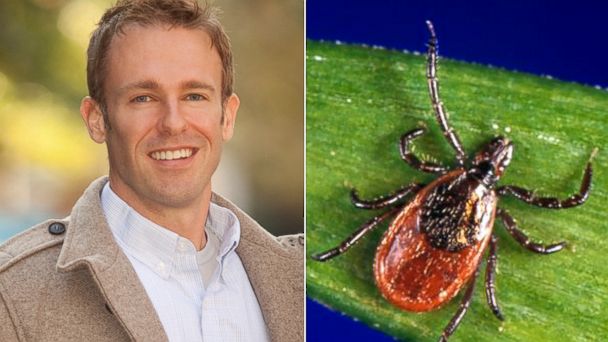 Allen Bargfrede said he was jumping into the shower when he spotted a tiny tick on his ankle that would change his life.

"I washed it off and didn't think about it anymore," said the 39-year-old associate professor of music business at Berklee College of Music in Boston, who was in Spain at the time for a conference. "I remember thinking to myself, 'I hope I don't get sick from that.'"

"I had severe anxiety," said Bargfrede, who was getting ready to head home to the U.S. when the symptoms began to worsen. "I was crazy scared to get on an airplane."

Bargfrede said it took nearly a year to confirm that he had Lyme disease after a string of "negative" tests, dangerous treatments and disbelief from most of his American doctors.

Babesiosis: Backyard killer mimics malaria and is on rise.

Everything you need to know about Lyme disease.

The best treatment for Lyme disease is the prompt use of antibiotics, according to the Centers for Disease Control and Prevention. But the CDC acknowledges that its recommended test can miss Lyme disease in its early stages, and it only catches an American species of the bacterium - not the one Bargfrede contracted in Spain.

The complexity of the bacterial disease, coupled with a raging controversy in the medical community over how to diagnose and treat it, is confusing for both doctors and patients. And in what has been dubbed "the Lyme wars," camps have been divided between those who believe the disease can be consistently tested and treated effectively and those who believe in a chronic and disabling form of the disease that is often not detected and is resistant to recommended treatments.

"The main problem for me was not being diagnosed early enough," he said. "The reality is, if they had gotten it right when I first went to the doctor, this wouldn't have happened to me."

According to the CDC, the cause of Lyme disease is the bacterium Borrelia burgdorferi, and the agency's recommended test only detects that particular species. But Bargfrede's illness was caused by Borrelia garinii, a species that's prevalent in Europe but not in the United States.

Bargfrede had a C6-based ELISA test, which is widely used in Europe and can detect as many as 18 species of the Borrelia bacterium. But the test is not used in the U.S., according to the CDC.

On its Traveler's Health webpage, the CDC notes that the garinii strain causes Lyme overseas, but adds that the disease is "rarely reported in returning travelers."

The CDC-recommended test has its limitations, according to a recent investigation by the New England Center for Investigative Reporting. It is only reliable later in the progression of the disease and is limited only to detection of the American variety of the bacterium.

As a result, a cottage industry of more than 70 alternative tests has cropped up in labs around the country, some reputable and some not. The NECIR report found that many of these alternative tests are ineffective, yielding false-positive results and leading doctors to over-diagnose a patient and order expensive treatments that may not work.

"An exemption in federal regulations allows many labs to offer Lyme tests without proof that they accurately identify the disease, leaving anxious patients and their doctors to decide which tests to believe," the article reads.

The CDC has become so concerned about these tests that it issued a warning in April for doctors and the public to avoid alternative tests.

"Ailing patients are increasingly forced to negotiate between the parallel medical worlds of doctors who use only federally recommended Lyme tests that may not catch the disease early on and 'Lyme literate' doctors who may diagnose them with chronic Lyme, often by using these alternative tests," it continues. "Most insurers do not cover these tests - which range from $100 to more than $1,000 - forcing patients to swallow the cost."

"Everyone agrees on both sides of this contentious debate that the tests need to be better," said Beth Daley, who led the NECIR investigation.

The many reputable labs that use alternative tests "are not purposely trying to pull the wool over your eyes, but there have never been any definitive tests to prove they work," Daley said.

About 300,000 cases of Lyme disease are reported annually, but they represent "only a fraction" of the total number of cases, according to the CDC. The disease is prevalent in the Northeast and Midwest, with nearly all of the cases landing in 13 states.

At first, the infection may causes flu-like symptoms like fever, headache and fatigue, as well as a bull's-eye skin rash called erythema migrans. Untreated, it can travel to the joints, heart and even the central nervous system, potentially damaging the brain and heart.

The incubation period is typically three to 30 days, and nearly 80 percent of those who are infected with Lyme have the classic rash, according to the CDC. Most cases can be treated successfully with a few weeks of oral antibiotics.

The CDC recommends a two-tiered serological test for diagnosis of Lyme: an ELISA (Enzyme Linked Immunosorbent Assay), which is followed up with a Western blot, both of which spot antibodies produced by the immune system in response to the infection.

"There are limitations with the recommended test," said Dr. Paul Mead, chief of epidemiology and surveillance for CDC's Lyme disease program. "We would love to have better tests available, but it's not as easy as it sounds."

Since antibodies take time to appear, the CDC-recommended test is unable to detect the infection when symptoms first begin. Up to six weeks later, "there's a good chance" the test will still be negative, but eventually the test will be positive if the disease is present, Mead said. Because of this lag time, most clinicians prescribe antibiotics prophylactically before getting definitive test results, he said.

"There are other methods that are potentially used - a blood culture or [DNA test that] looks for the organism itself and not for the immune response," he said. But "most of these [tests] are terrible in the setting of Lyme."

Blood tests are not helpful in Lyme disease, according to Mead, because the Borrelia bacterium is a spirochete that quickly leaves the bloodstream and "burrows" into other parts of the body.

"The recommendation is if you have early signs of the disease, like a bull's eye, the physician should order a test, but if it looks like Lyme, give them antibiotics," said Mead.

Later, if arthritic or neurological symptoms persist, Mead said doctors should retest for antibodies, and if the tests are negative, consider other causes of disease.

"Certainly there is a lot of movement in terms using [the C6-based ELISA test] more broadly in the U.S.," he said of the European test used to diagnose Bargfrede. "We are suggesting that as data becomes available to support that alternative, it would be a good possibility."

"There is no question a subset of patients had genuine Lyme and will have persistent symptoms after treatment," he added. "In that case, we have to figure out the best way to treat them. We can give them more antibiotics, but that is more harmful than good."

Even though many patients and practitioners insist Lyme can be chronic, CDC scientists say they're wrong.

"We rely on things that are tried and true," Mead said. "If you are sick for years and come back with a negative test for Lyme disease, you have to open your mind that it might be something else."

But many who claim to suffer from a chronic form of Lyme disease say doctors should not rely solely on positive test results, and point to the need for more research on reliable testing and innovative treatments.

"People are suffering terribly, trying to find a way to afford treatment and become a 'patient' of someone who actually knows how to help, while keeping a job and a roof overhead," said Trisha McCleary, cofounder of Sturbridge Lyme Awareness of Massachusetts or SLAM. "People are being turned away from doctors and their diagnosis is being left up to testing known to be faulty and unreliable instead of clinically diagnosed."

McCleary, 49, said she has battled Lyme disease symptoms for decades. As a teen, she said she had chronic muscle and joint pain and was diagnosed with fibromyalgia. Later, in 1996, she said doctors thought she had hypothyroidism.

In June 2006, she said her head "felt foggy and not right," and she lost her ability to speak and move. Doctors sent her to a psychiatrist, she said.

By 2009, she said she found a "Lyme literate" neurologist who ordered IV antibiotics, probiotics and an "herbal protocol," and for the first time, she said she "felt life coming back and knew I could and would fight for my life."

Later, McCleary said her "lifesaver" doctor was "harassed" for not following standard medical guidelines, and she ended up without medication or a doctor who would continue to treat her for Lyme disease. She said her "struggle" continues and "the damage to my body is ongoing as it is for most chronic Lyme sufferers."

As for Bargfrede, he said he lost six months of work until he finally was diagnosed with Lyme disease transmitted by a Spanish tick.

He said an American doctor believed he had Lyme but couldn't prove it, and told him, "If you got sick in Europe, go back to Europe." There, the C6-based ELISA test came back positive. But Bargfrede said that when he returned to the U.S., the same American doctor refused to give him the IV antibiotics prescribed by the German doctor, claiming he "didn't believe the test."

He alleges some doctors are fearful of bucking CDC recommendations.

"All the while, I can't think straight and can hardly get out of bed," he said. "I was fighting for my life and fighting with my doctor."

Bargfrede said he tried the "natural path" and ended up in intensive care with kidney and liver failure after a practitioner prescribed an IV "silver" cure.

After several more doctors, he finally found one who prescribed intravenous antibiotics. And by April 2014, 10 months after his tick bite, Bargfrede said he could finally "think straight and I feel a lot better."