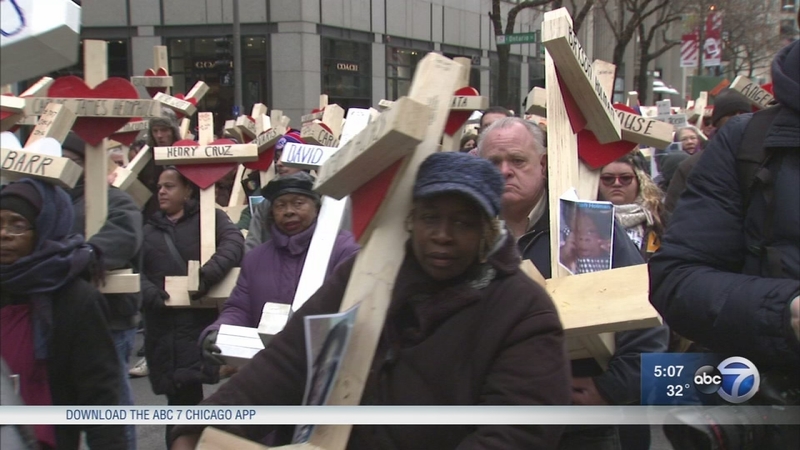 CHICAGO (WLS) -- Nearly one-thousand people marched on the Mag Mile Saturday, to honor Chicago's 2016 murder victims. Many of them were carrying handmade crosses...one for each person murdered in the city during the year.

Annette Johnson was filled with emotion as she remembered the son Chicago's gun violence took from her. 22-year-old Kewon Vilella was found shot to death on a porch in the city's East Garfield Park neighborhood on October 9th. "It's just a horrible tragedy that we never expected," Johnson said.

Today his loved ones joined others touched by the violence for a peace walk - where family members and friends along with strangers carried crosses representing the people shot dead in Chicago in 2016.

"We feel a lot closer to these people who have lost loved ones just like we did. But it's still hard. It's really hard on all these families," said Mayra Ortiz-Colon

During the procession for the murdered the only sound was the reading of the names of each of the nearly 800 victims of the violence.

Before the walk, relatives and friends moved quietly among the wooden crosses made by aurora resident Greg Zanis. Each bore the name of the person shot and killed - some even had their picture. "This is their day. This is where they can be remembered," Zanis said.

According to Chicago police department crime stats -- there were over 3,000 shootings and more than 760 people were killed in Chicago in 2016.

And while Brianna Cummings says this walk won't bring back her 18-year cousin Dequan Barnett, who was killed last month, she hopes it may spare others the pain of loss. "I'm hoping everybody will wake up and realize too many people are being lost to gun violence," Cummings said.
Related topics:
chicagopeace marchchicago violencemagnificent mile
Copyright © 2021 WLS-TV. All Rights Reserved.
CHICAGO VIOLENCE