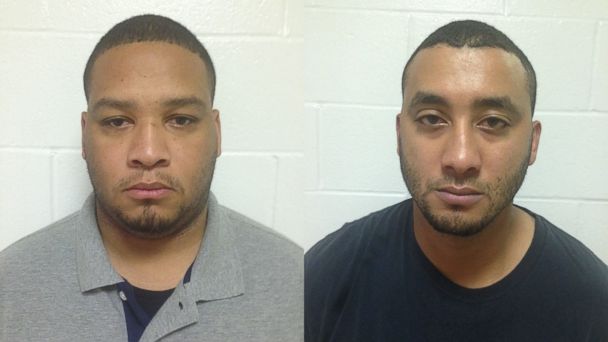 MARKSVILLE, La. -- Two law-enforcement officers jailed on murder charges for a 6-year-old autistic boy's fatal shooting in central Louisiana have been targets of previous complaints that they used excessive force or neglected their duties.

Residents have filed a string of civil lawsuits against Derrick Stafford, 32, and Norris Greenhouse Jr., 23, who have worked as police officers in Marksville but were moonlighting as city marshals when they allegedly opened fire on Chris Few and his son, Jeremy Mardis, inside a car on Nov. 3.

Few was severely wounded but survived the shooting that killed his son. A lawyer for Few told The Associated Press on Monday that a police body camera showed that the father was holding both of his hands up and didn't pose a threat when the officers began firing at least 18 bullets at the car.

A woman sued Stafford in 2012 over allegations that he shocked her with a stun gun while she was handcuffed. Another lawsuit accused Stafford of breaking a girl's arm while intervening in a fight on a school bus in 2012.

Stafford and Greenhouse also are defendants in a lawsuit filed by a man who claims officers used excessive force in arresting him at a 2014 festival. Another suit claims Greenhouse and Stafford "stood idly by and did nothing" when another officer assaulted a teenage boy at a Fourth of July celebration in 2013.

And last year, an Avoyelles Parish jury awarded $50,000 to a man who claimed Stafford arrested him in retaliation for making a complaint about him.

In 2011, Stafford was indicted on a charge he raped a 15-year-old in 2004, when he was 21. The same indictment also charged him with raping another person in 2011. Both charges were ultimately dismissed, though court records don't indicate why. A spokesman for the local district attorney's office didn't return a call seeking comment.

Anthony Radosti, vice president of the Metropolitan Crime Commission in New Orleans, said excessive-force complaints should be a "red flag" for a police department to evaluate whether an officer needs to be disciplined or at least retrained.

"Even smaller departments should have an early-warning system," said Radosti, a retired New Orleans police officer.

Stafford is a full-time lieutenant with the Marksville Police Department. Greenhouse is now a full-time city marshal. Both were on marshal duty on the night of last week's shooting. Initial reports suggested they were trying to serve Few with a warrant when he fled onto a dead-end road and then reversed his car in their direction.

But Col. Mike Edmonson, head of the Louisiana State Police, said there was no evidence of a warrant or any gun recovered at the scene.

An FBI spokesman says federal authorities are in "constant communication" with state investigators about last week's shooting. The State Police is leading the investigation, and the state attorney general's office is prosecuting the case.

Craig Betbeze, a spokesman for the FBI's New Orleans division, said in an email Tuesday that he can't elaborate on why the FBI and Justice Department's civil rights division have been communicating with the State Police about the case. Edmonson said the State Police routinely share case information with the FBI and will in this case, too.

On Tuesday, State Police investigators met with prosecutors from the state attorney general's office to discuss their investigation. It was the first meeting between the State Police and Attorney General James "Buddy" Caldwell's staff since his office took over the prosecution of the case against Stafford and Greenhouse.

Avoyelles Parish District Attorney Charles Riddle recused himself from the case Monday because one of his assistant prosecutors is Greenhouse's father.

"This was not a threatening situation for the police," Few's attorney, Mark Jeansonne, said after he attended a closed-door hearing at the jail where Judge William Bennett issued the bond ruling Monday.

After the AP published Jeansonne's comments, Bennett issued a sweeping gag order prohibiting anyone involved in the case, including potential witnesses and victims, from providing any information to the news media.

The officers were moved from the jail in Marksville to a lockup in the central Louisiana city of Alexandria after Monday's bond hearing.