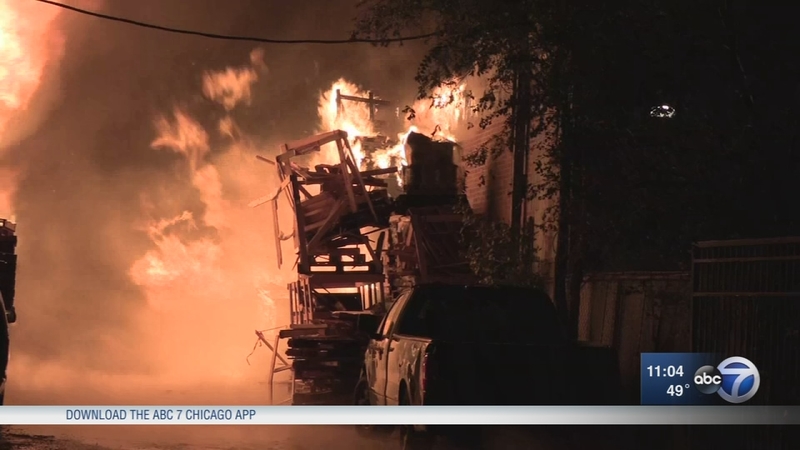 CHICAGO (WLS) -- Two firefighters were hurt battling a five-alarm blaze that destroyed a pallet yard on Chicago's Southwest Side early Friday morning. The owner said he lost everything.

Crews responded to a report of a two-alarm fire at a large commercial building in the 2500-block of West 26th Street around 3:15 a.m. When they arrived, a wooden pallet shop housed in the building and semi trailers parked out back were fully engulfed by flames. Heavy smoke billowed out of the building and could be seen by drivers on I-55.

The blaze escalated to five alarms around 4:45 a.m. At one point, 210 firefighters were on the scene. The flames spread to a muffler shop, a dollar store and at least one other business nearby, officials said.

A hazardous materials team was also called to the scene to test the air because of the materials that were burning inside. CFD Deputy Fire Commissioner Michael Callahan said the crews' biggest challenge was getting enough water onto the building to douse the flames.

"There's a viaduct to the east of here. When there is a viaduct, it doesn't allow us to have adequate water supply. So we had to go to an in-line operation, meaning we had to stack multiple fire engines to send water to each other so we could get water down to the fire scene," Callahan said.

The fire was under control by around 5:30 a.m. and extinguished by around 6:10 a.m. Crews watched for hot spots throughout the morning.

Lamortto Woffort took his car to the muffler shop Thursday night. When he woke up Friday, he saw the business was on fire. His car was still inside.

"I woke up and said, 'Oh no, that's the shop. We walked over here. It was night time. We couldn't see. I came back in the daytime to see if the car was damaged or not," Woffort said.

Thankfully, his car will be fine. Two dogs were rescued from the muffler shop. They are expected to be OK.

The owner of the pallet yard said he was renting the space from the commercial property owner, who lives in Mexico. He said the pallet shop was not able to be insured because it wasn't up to code. He has no idea how to move forward.

Two firefighters were transported in good condition to Rush University Medical Center. One sustained a minor shoulder injury and the other had trouble breathing.