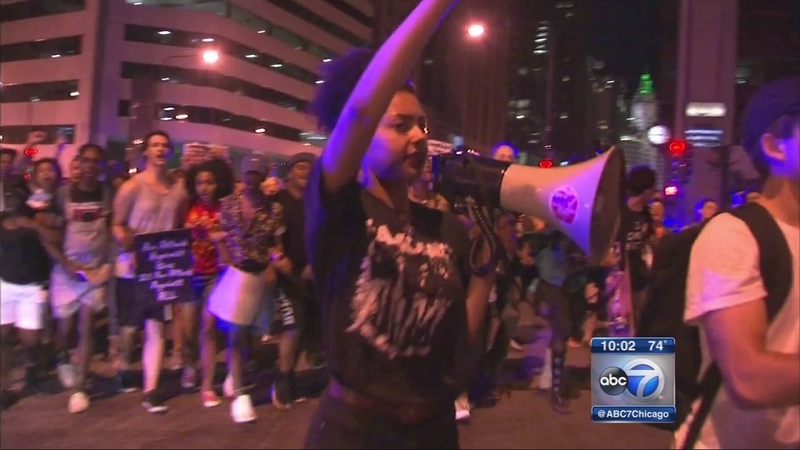 CHICAGO (WLS) -- Hundreds of protesters gathered Sunday evening and marched through the Loop and River North neighborhoods, two days after the release of videos related to the Chicago police shooting of 18-year-old Paul O'Neal.

The group started gathering at about 5 p.m. at Millennium Park. At about 7 p.m., the group was stopped at the intersection of State and Lake streets. Organizers said they plan to march south on Michigan Avenue and then return to the park by 9 p.m.

Protests stopped Sunday night at State and Lake streets in the Loop.

The demonstration was organized by teenage girls with the Black Lives Matters Chi Youth, who said they were disturbed by what they saw in the videos.

"I was shaken up for the rest of the day after I saw the videos," said Natalie Braye, of Black Lives Matters Chi Youth. "I just find it incredibly appalling that they did this to this boy."

Saturday night, a rally outside Chicago Police Headquarters didn't break-up until very late. On Friday, a group of protesters blocked service on the Metra Electric Line in the South Shore neighborhood, the same area where O'Neal was shot and killed on July 28. Those protesters were cleared by midnight.

The rallies come after Chicago police released dashcam and body camera videos of the shooting on Friday.

The videos show police shooting at the stolen Jaguar O'Neal was driving, then O'Neal veering right into a police cruiser, crashing head on.

The teen gets out of the car and runs - police are close behind. He's chased into a backyard, where he is wounded by police. He died a few hours later.

"Our policy clearly states we are prohibited from firing into or at moving vehicles if the vehicle is the only use of force," Chicago Police Superintendent Eddie Johnson said Saturday.

Family friends and many protesters say the focus should not be on O'Neal's actions and the fact that he was driving a stolen car, but should instead focus on the fact police did not follow proper protocol.

"I am disturbed by the focus on Paul O'Neal and not the behavior of the police department," said family friend Jennifer Thompson-Watson. "They are the ones that bear the responsibility for being trained to deal with whatever they encounter."

A protest is planned downtown after the release of video of the shooting of Paul O'Neal.