Much of what was heard on those tapes had to do with the prisoners' everyday lives. There were, however, several allusions to James Glasgow being gone and a plan to make it happen. But at one point, you do hear Peterson saying that his Spidey senses are going off as he grows suspicious of his friend turned informant.

Among the prison banter recorded in November 2014 at Menard Correctional Center were snippets of conversation which prosecutors believe allude to the plan to have Will County State's Attorney James Glasgow killed.

Peterson: Oh, it's...I mean...you know I am...I am almost in tears that you're doing this for me.
Smith: But, and look, that's the first step to do everything we've been working on.

Peterson: Right.
Smith: That's the first step.
Peterson: Because, if...if he's gone, I won't get prosecuted for Stacy. Because he...he wants, to prosecute people without evidence.

Stacy Peterson, Drew Peterson's fourth wife, missing since 2007, is presumed dead. There have been several allusions to her during the trial. Wednesday, Peterson was heard talking about conversations had with then attorney Joel Brodsky during his 2012 trial for the murder of third wife Kathleen Savio.

Peterson: You know how many times me and my lawyer knew they were listening? And we were telling them like, 'she's in Peoria.
Smith: Right.
Peterson: The next week, they were there. They were tearing up (expletive) Peoria.
Smith: Right.
Peterson: ...and it was just like, because him and I....what else...what else did we do? We had them believing Stacy was going to come and testify.

The defense is expected to get its chance to cross examine Antonio Smith Thursday at Randolph County Courthouse in Chester. They were trying to attack his credibility as well as the voracity of those tapes. 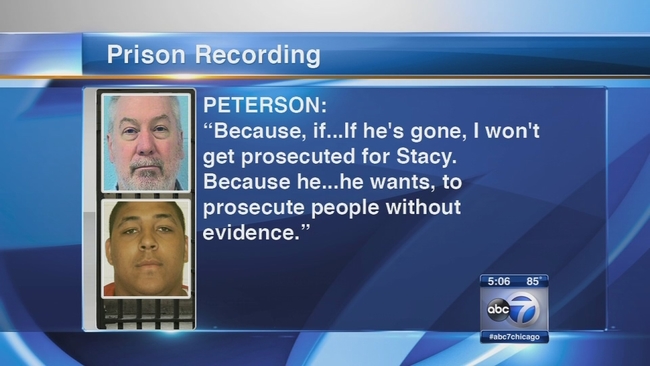