More than half the police in Chicago airports are unarmed 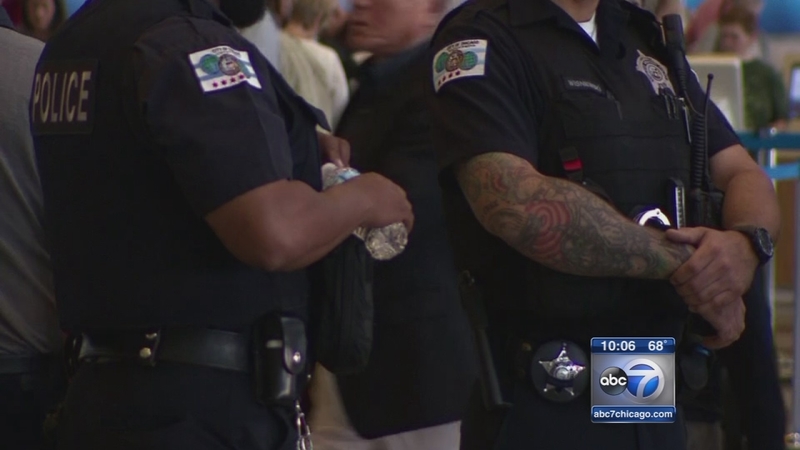 More than half the police in Chicago airports are unarmed

CHICAGO (WLS) -- If armed terrorists rushed the front entrances at Chicago's airports they would find more than half of all uniform police officers at O'Hare and Midway are unarmed.

At O'Hare and Midway not all 500 sworn police officers are created equal. Regular Chicago police carry guns. City Aviation Department police do not, even though they all undergo law enforcement training and certification. The unarmed airport police say that would be a problem in a terrorist attack.

With passengers scattering in Istanbul, authorities say armed police near the front door brought down at least one of the terrorists and stopped him from shooting even more people before blowing himself up.

At Chicago's airports there are about 230 armed Chicago police officers and nearly 300 unarmed aviation police.

"We are the only airport that allow our police officers to be unarmed while on duty," says 29th Ward Alderman Chris Taliaferro.

Taliaferro has been a Chicago police officer for more than two decades. He's now on leave, serving his first term as 29th Ward Alderman. Last spring he introduced an ordinance that would arm aviation police. It's now stalled in committee.

That run and hide policy is "a recipe for failure" in a terrorist attack such as Istanbul, according to Matt Brandon, with the union that represents unarmed aviation officers.

The union has been pressing for aviation cops to be armed for decades. The I-Team first reported on it in 1999.

In 1999, the I-Team reported on airport security at Chicago's O'Hare and Midway airports.

"The public is not safe. We're not safe. And anybody that we would have to protect is totally unprotected when we are called into a situation," said a Chicago Aviation Officer named Ethan in 1999.

That was before today's terror threat. And before a Congressional report in May that cited the "vulnerability of commercial airports to weaknesses in perimeter security" and found a need for a "system-wide assessment of airport vulnerability...airport perimeter and access control security vulnerabilities."

"This is not that hard to solve. You need armed, trained individuals on the perimeter of the airports, whether it's CPD or someone else. Let's figure that out," says security expert Jeffery Cramer.

The Chicago Department of Aviation issued a statement, saying:

"The Chicago Police Department (CPD) is the primary law enforcement agency at O'Hare and Midway International Airports. Chicago Police provide the command structure, armed officers and specialized teams for explosives and active shooter response. The airports' Aviation Security Officers (ASOs) monitor and control access at the secured area perimeter gates; respond to terminal door alarms; and provide vehicular patrol in the secured area for security, traffic enforcement, safety and compliance purposes. They also have a key role in guiding passengers to evacuation routes and safe areas. The ASOs work in close coordination with the Chicago Police Department. Chicago Police coordinates with FBI, TSA, U.S. Customs and Border Control, and others to implement a multi-layered approach for protecting the airports."

"The attack on the International Airport in Istanbul, as tragic as it was, would have been much worse if an armed officer had not stopped one of the terrorists from detonating his suicide vest in a crowd of panicked travelers. Aviation Officers at the airports here in Chicago should be able to defend the passengers who use O'Hare and Midway airports, the workers who service them, and themselves from this threat.

The current policy of TSA and the City of Chicago Department of Aviation that Aviation Officers should 'run and hide' in the event of a terrorist attack is a recipe for failure! Local 73 continues to demand that the Aviation Officers at O'Hare and Midway airports be armed for the public's safety, and for Officer's safety."
Related topics:
o'haremidway airportterrorismohare airporti teammidway airport
Copyright © 2021 WLS-TV. All Rights Reserved.
More Videos
From CNN Newsource affiliates
TOP STORIES