NCIS Agent Betrayed His Country Because He Was 'Weak, Vulnerable,' Lawyers Say 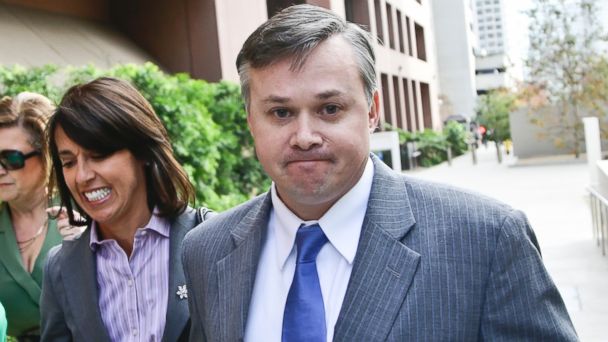 He was lonely. He needed a girlfriend. He needed father figure. He was suffering from physical ailments. He has mental disorders. He drank too much. He was tired. He was weak. And when he was at his absolute lowest point, he was preyed upon.

That's how attorneys for John Beliveau say the former Naval Criminal Investigative Service (NCIS) agent was seduced into becoming a mole in the law enforcement agency for a Malaysian kingpin in one of most widespread corruption cases in U.S. military history.

"In the instant offense, severe mental illness and compromised judgment, rather than greed, motivated Mr. Beliveau," the attorneys argued in a recent court filing, painting a pitiful picture of their client before a sentencing hearing Friday. The defense wants a year's home confinement followed by supervised release. "He was weak and vulnerable, and in his compromised state, he exercised terrible judgment."

Prosecutors aren't buying it and called the defense's request an "insult." They want him to serve 15 years in prison.

"Beliveau's sentencing submission discusses his psychological diagnoses at length but makes no effort to identify how they justify his decision to take bribes from the target of a criminal investigation," prosecutors said in their own filing last week. "At any rate, there can be no doubt that the facts establish that Beliveau is a high-achieving adult who understood the consequences of his actions ... Unfortunately, however, Beliveau used his considerable talents to perpetuate a lengthy and damaging bribery and fraud scheme. Beliveau conspired to steal tens of millions of dollars from the U.S. Navy, he put lives at risk, and has forever tarnished the reputation of the agency and country he was sworn to protect. That he did so for a steady stream of prostitutes, lavish trips and dinners and envelopes of cash is directly relevant to the court's analysis of his history and characteristics."

Beliveau, who was a supervisory special agent in the NCIS, pleaded guilty almost three years ago to trading secret information in exchange for luxury travel, prostitutes and some $30,000. But what he really wanted, his attorneys said, was a friend.

He was on the payroll of Leonard Francis, also known as Fat Leonard, the charismatic head of Glenn Defense Marine Asia (GDMA). Francis' business was in naval husbandry, providing large American ships in-port services like waste disposal, laundry and refueling at ports throughout Southeast Asia.

Behind the scenes, Francis operated a sprawling bribery ring involving scores of U.S. Navy servicemen who allegedly provided Francis classified information on ship movements, steered their ships toward his ports or otherwise aided in Francis' ripping off the Navy to the tune of tens of millions of dollars. More than a dozen of Navy officers, up to the rank of vice admiral, already have been disciplined, have been criminally prosecuted or face charges related to the conspiracy. Francis was arrested in September 2013 and pleaded guilty in January 2015.

Beliveau came into play after Francis learned he was under investigation by the NCIS, the Navy's law enforcement agency. Beliveau, who joined the NCIS in 2002, met Francis when he was stationed in Singapore from 2008 to 2012 and found Francis to be a "wealthy, smooth-talking, popular man," Beliveau's attorneys said. In the NCIS agent, Francis apparently saw someone he could use.

"[Francis] wined, dined and cultivated relationships with his guests that he would later exploit," according to Beliveau's attorneys. "Mr. Beliveau was weak ... In essence, Mr. Beliveau was a prime target for Francis. He was exhausted and lonely."

The picture of a vulnerable, fragile Beliveau comes from a court filing by his defense team last week that amounts to a more than 70-page plunge into the defense's version of its client's psyche - that of a man beset by intense insecurities and loneliness compounded by serious physical and mental ailments, some stemming from childhood.

The filing says Beliveau lived with obsessive compulsive disorder and anxiety. He drank excessively. He had a failed military career. He never had a romantic relationship and to this day has no real friends.

The attorneys also argue the Beliveau suffers from post-traumatic stress disorder after allegedly witnessing a horrible crime in Southeast Asia in 2009 after, in the course of his official duties, calling a "meeting of locals" that involved "both local officials and gang members." The meeting turned extremely violent.

"[Beliveau] watched a gang member with a machete behead a fellow gang member at such close range that the man's blood splattered on John's hand," the filing alleges, quoting Beliveau's therapist.

The filing says Beliveau never reported the incident because he "didn't want to discuss it."

Though he was a successful NCIS agent and was highly regarded, his attorneys say all these issues teemed in his mind until Beliveau found what he thought was a friend in Francis and eventually betrayed his country for him.

"[Beliveau] became attached to Mr. Francis, a man who was powerful and had the resources to keep him safe and provide him with the numbing agents that John used as his primary coping mechanism," Beliveau's therapist once wrote, as quoted in the defense filing.

The "numbing agents" including money, fine dining, alcohol and prostitutes.

By early 2011, he was hooked. Later that year, prosecutors say, at Francis' request, Beliveau began turning over scores of internal NCIS reports and coached Francis on how to best answer investigators' questions.

"As the months went by, Mr. Beliveau fell deeper into Francis' scheme to a point in which they communicated almost daily. He was symptomatically obsessed with Francis and overwhelmingly attached to the relief Francis could provide through the parties and prostitutes," Beliveau's attorneys say.

The whole time, the two were exchanging colorful emails about hookers and payment.

"You give your whores more money than me ;)," Beliveau wrote in a 2012 email to Francis, according to the criminal complaint. "Don't get too busy that you forget your friends ... Let me know ... I can be your best friend or worst enemy."

Prosecutors say it was even worse: Beliveau allegedly provided Francis with "real-time updates and warnings about every significant development" in the NCIS's cases by text message, along with the identities of cooperating witnesses. He purportedly warned Francis that an NCIS source was making covert recordings of a GDMA employee.

"I have 30 reports for u, not good, ur girl in Thailand fd up and got caught on tape," one of the messages from Beliveau said, according to prosecutors. In another text, he allegedly used a profanity to describe a female NCIS colleague who was involved in a GDMA investigation and told Francis not to worry because she is "stupid."

Prosecutors said Beliveau "did not simply pass raw information but instead, drawing on his training and experience, provided his analysis of its significance and gave advice on how to respond to, stall and thwart the investigations."

Eventually, military authorities came to suspect a mole inside the NCIS and organized a "clandestine team of agents" to conduct a "secret investigation that was completely walled off" from the internal NCIS system, prosecutors say.

In July 2013, authorities went back into the NCIS system and laid a trap by planting a fake report that said the investigation into GDMA was to be closed. Beliveau dutifully reported that to Francis, who, emboldened, traveled to San Diego supposedly to meet with Navy officials that September. Francis was nabbed, along with Beliveau and the first of the Navy officers to be caught up in the scheme.

Friday, just over three years after he was arrested, Beliveau will be sentenced. The next 15 years of his life hang in the balance.

The defense said that in addition to consideration of his weakened mental and physical state, his crimes were not as bad as those committed by many others in the case who received much lighter sentences than the government is recommending and that a former law enforcement officer could be especially endangered in prison.

They also argued that until he met Francis, Beliveau had hardly done a thing wrong in his life.

"Mr. Beliveau's involvement in this scheme is truly an aberration from who he truly is - an honorable, thoughtful man dedicated to a life of service," the filing says. "Mr. Beliveau is deeply remorseful and disappointed in himself."

Prosecutors said they based their 15-year recommendation on compounding sentencing guidelines and argued more generally that Beliveau must serve such a sentence "to achieve the ends of justice, including chiefly the unprecedented nature and extraordinary aggravated circumstances" of his offenses.

They said that because he was a law enforcement officer, his crimes were especially despicable compared with others' in the scheme.