WLS
By Jessica D'Onofrio and Stacey Baca
CHICAGO (WLS) -- A 12-year-old boy was shot in the chest in Chicago's Gage Park neighborhood.

His family said he was playing in the street in front of his father's home near West 54th Street and South Sacramento Avenue Thursday night. Police said around 9 p.m., a gunman pulled up, opened fire and then drove off.

A neighbor who did not want to be identified says the boy was shot because he didn't throw up a gang sign.

A witness says a passenger in the SUV got out to look at the boys and yelled, "They're kids," but the driver had already started shooting.

"They're innocent. They're playing. They can't even be safe in their own neighborhood," said neighbor Stephany Casillas.

The boy was rushed to Mount Sinai Hospital in critical condition. His family was there all night. Chicago police say the boy remains hospitalized in critical but stable condition, and they are hoping he will pull through.

Manuel Lepez, a friend of the victim, is devastated.

"It's pretty hard. All the violence in Chicago. He wasn't a gang banger. He wasn't a trouble maker. He was actually a good kid," Lepez said.

Lepez said there were other young witnesses who saw the boy get shot. He said they were so shocked by what they saw that they could hardly speak.

"The little boy knows better than to be in gangs... they trust him being outside. That's why he's outside most of the time playing with his friends," sais neighbor Maria Gomez.

At the scene Friday, police tape and medical supplies litter the area - it's a neighborhood known for gang problems.

"When bangers over here check the little kids and the kids... throw this down... the kids don't want to because they don't no part of it because they're scared. These bangers figure, ah, you're something then too," said neighbor Manny Garcia.

Neighbors say the boy - who is a student at Sawyer Elementary School - is improving at the hospital.

Police are canvassing the area and requesting video from any cameras they find including red light cameras, security cameras and business cameras. They are also following up on leads. No arrests have been made.
Related topics:
gage parkchicago shootingchild shot
Copyright © 2020 WLS-TV. All Rights Reserved.
RELATED 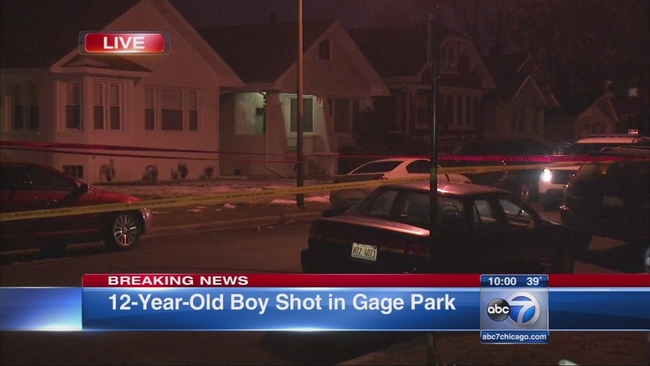