WLS
By John Garcia
CHICAGO (WLS) -- Chicago Police officers are preparing to patrol Chicago's streets by bicycle and the department's newest bike patrol officers were put through the paces on Tuesday.

Officers are learning they will have to ride their bike, weaving through tight spots, such as in crowd control during marches and protests. Police say these bike patrols are the next generation of community policing, in many cases more effective than an officer on foot or in a car.

They said it proved very effective during the NATO protest two years ago.

"On a bike you can slow down, you can talk to people if somebody has a question," said Trysha Solis.

Mayor Rahm Emanuel and Police Superintendent Garry McCarthy plan to double the size of the department's bike patrol, to about 400 officers.

"Too frequently we hear sometimes that officers are just driving by, they don't stop. On bikes they're more frequent to stop," Emanuel said.

"It's better community policing, it's more effective for our tactics that we using and employing," McCarthy said.

In order to join the unit, the officers go through a rigorous 32-hour training program. They learn not only how to maneuver the bike well, but also how to do the job on the bike without all the equipment that comes in a squad car.

Riding through crowds requires officers to be able to make tight turns and ride slowly while remaining upright.

The officers get three chances to go through the course. If they hit a cone or their feet hit the ground, they fail.

The officers are in the second of four days of training. 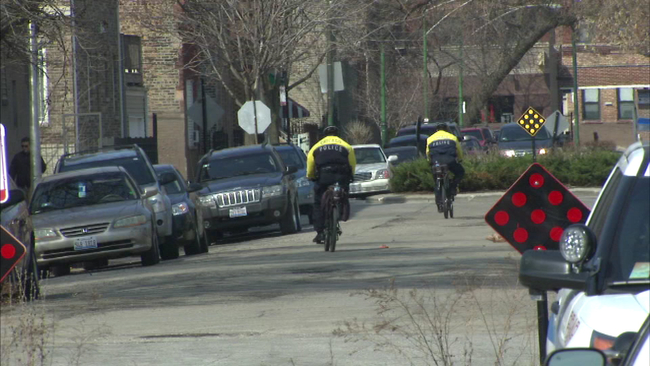