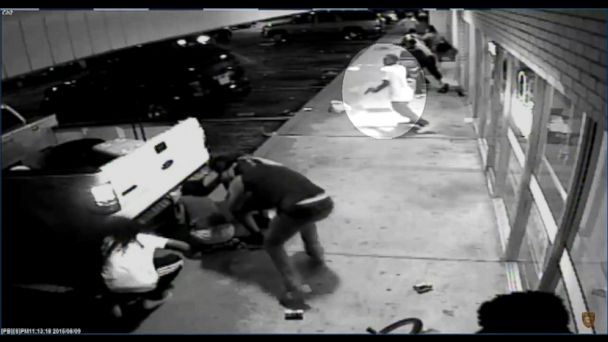 Police have released new surveillance footage that they say shows a teen pulling a gun from his waistband moments before he was shot by officers after allegedly opening fire on them.

According to St. Louis County Police, Tyrone Harris, 18, began firing at an unmarked car carrying detectives after shots were fired Sunday night near protests marking the anniversary of the death of Michael Brown.

According to police in a statement released today, the brief footage, from an insurance company, shows Harris "grab a handgun out of his waistband once shots are fired during the protest in the W. Florissant corridor seconds prior to the officer involved shooting," referring to the street on which the protests were located.

Earlier, police said Harris "immediately turned and began firing" at the police car, which they say had its lights on, hitting the vehicle several times.

The suspect also allegedly fired at the officers when they got out of their car and they returned fire, hitting him several times. He was charged with assault on law enforcement among other counts.

Harris was critically wounded in the gun battle.

Harris' father, Tyrone Harris Sr., said his son got caught up in a dispute between two groups of people and was "running for his life," according to the Associated Press.

"My son was running to the police to ask for help, and he was shot," he told the AP. "It's all a bunch of lies ... They're making my son look like a criminal."

The police-involved shooting came amid several other violent incidents that night during protests marking the death of Brown, who was shot and killed by Ferguson Police on Aug. 9, 2014.