Despite that, some aldermen say the increase is not enough to pay for city worker pensions for the long term.

The mayor's office emphasized that even with this increase, Chicago's water and sewer rates would still be lower than many large cities nearby like Harvey, Berwyn and Oak Park.

The water tax hike is supposed to help pay back the municipal employees pension fund, which is owed hundreds of millions of dollars.

With a 40-10 vote, City Council passed the mayor's ordinance Wednesday. The tax increase will take effect early next year.

This is the latest tax that Mayor Rahm Emanuel says is a necessary evil to shore up pension funds.

The tax will specifically go toward the municipal workers pension fund. It will go up gradually over the next five years beginning with an annual cost of $53.16 in 2017. By 2021, residents will pay almost $226 a year.

Praising aldermen for their collective courage for doing something that is not politically popular, the mayor lobbied heavily for several weeks to get the tax passed. Some justified it by comparing the rates to other cities.

While the mayor said the latest tax puts city finances on the path to solvency, 10 aldermen who voted against it said the tax hike is just another example of the city kicking the can down the road. By 2023, the city worker pension fund will need another $300 million.

"We need this administration to look at other revenue streams that are large enough to deal with the pension problems and do it in a way that is more progressive than what is shown here," John Arena of the 45th ward said.

The mayor admits additional revenue will be needed a few years down the road.

In other city council news, there was a very close vote on an O'Hare bond issue. Over 20 aldermen voted against it.

Their point was to bring attention to the department of aviation about the lack of minority contracts.

#MRE gets his water tax increase by a vote of 40-10. @ChiCouncil pic.twitter.com/kKyps43n7X 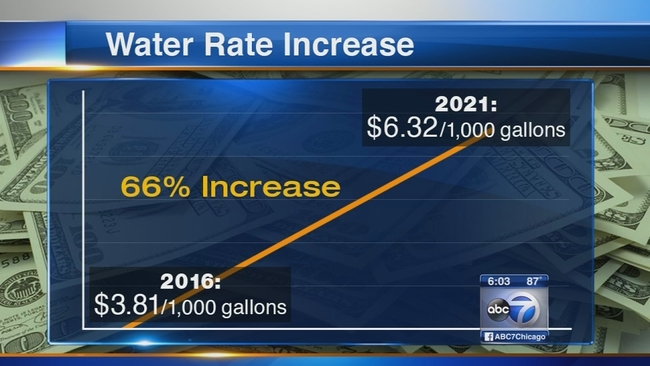