AP
WASHINGTON -- At least 51 laboratories in 17 states and three foreign countries received potentially live anthrax spores from the Defense Department over the past decade, and the number is likely to grow, Pentagon officials said Wednesday.

The scope of the problem remains unclear, but Deputy Defense Secretary Robert Work told a news conference that the problem poses little risk to public health because the suspect anthrax was transported in very low concentrations.

Work said no individuals are known to have been infected with anthrax as a result of the mistaken shipments. He said the errors at the originating Army laboratory at Dugway Proving Ground in Utah were at least two-fold: a failure to fully inactivate, or kill, anthrax spores through radiation, and a failure to confirm through testing that the inactivation worked properly before packaging and shipping the samples.

As recently as last Friday the Pentagon said live samples may have been sent to 24 labs in 11 states. On Wednesday, Work said the number of labs had risen to 51.

"This number may rise," he said, as other batches of anthrax at four Defense Department labs are tested.

The Centers for Disease Control and Prevention is leading an investigation of the matter.

Last Friday, Work ordered a comprehensive review of laboratory procedures associated with killing live anthrax for shipment to labs for research and other purposes, including for calibrating biological threat sensors such as those used by a number of federal government agencies, including the Pentagon.

The scope of the problem has grown almost daily since the Pentagon first acknowledged it publicly May 27.

Among the government labs identified in recent days as having received the suspect anthrax were the Army's Edgewood Chemical Biological Center in Maryland and the Naval Surface Warfare Center in Virginia, as well as a lab on the grounds of the Pentagon.

Officials said that the Edgewood lab sent some of the samples it had received from Dugway to other labs in the U.S.

Defense Secretary Ash Carter on Sunday told reporters while traveling in Asia that the mistaken shipments were an "unfortunate incident." He said the Pentagon will make "sure that any public health consequences of this are avoided" and ensure that it never happens again.

The CDC has said four people at labs in Delaware, Texas and Wisconsin were recommended to get antibiotics as a precaution, although they were not sick. U.S. officials at Osan Air Base in South Korea said 22 people were being treated for possible exposure there after word surfaced that an Osan lab was among the facilities that received suspect anthrax. 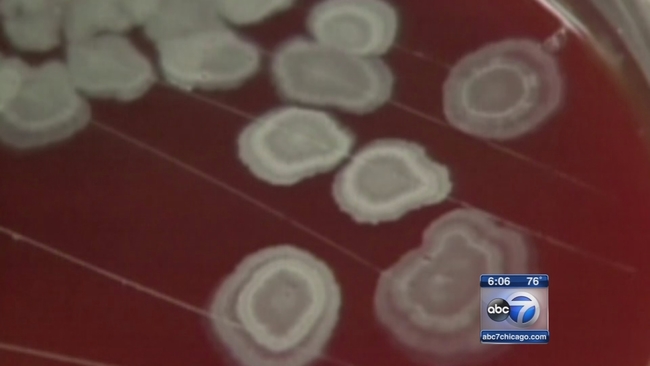