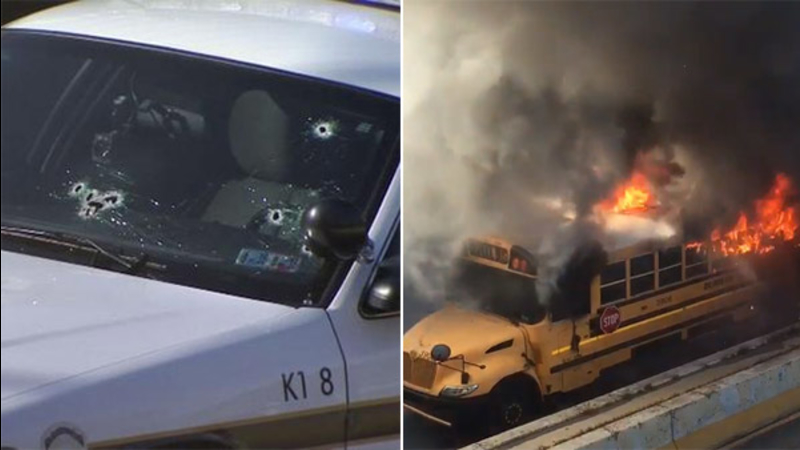 VIDEO: Cleanup underway after I-676 incident

CENTER CITY -- A Pennsylvania state trooper has been hospitalized after being shot in an altercation on I-676 in Center City Philadelphia.

The incident began around 9:30 a.m. Tuesday on I-76 at University Avenue where Pennsylvania state troopers conducted a car stop on a vehicle for expired registration.

There were four males inside the car, all of whom were removed from the vehicle by police. One of the men was placed in handcuffs and put into the backseat of the police cruiser, and two others were sitting on a jersey barrier, when the fourth suspect got back into the car and suddenly took off.

Police say the suspect then maneuvered to be alongside the trooper, at which the suspect began firing from his car.

The suspect got out and continued to fire on the pursuing state troopers. Trooper Casey immediately began to return fire, but during the exchange he was struck once in the shoulder.

The suspects' vehicle then caught fire, and the flames spread onto the bus, soon consuming both vehicles.

Luckily, there were no students on board the bus at the time of the crash, and the bus driver was reportedly uninjured.

Other troopers rushed Casey to Hahnemann University Hospital where he is currently listed in good condition.

Two suspects are now in police custody, including the alleged shooter - said to be a juvenile. But police are looking for two others, who fled the scene of the initial traffic stop.

Police investigate car involved in shootout and fire on 676 in Center City. Trooper was shot in shoulder. pic.twitter.com/z2ZJGqbr98