KTRK
HOUSTON, Texas -- New information from a paternity suit between a Harris County deputy and her husband, both who have been charged in the murder of a 24-year-old man, reveals claims of drug, alcohol and anger issues.

Deputy Chauna Thompson filed the suit in 2000 claiming that their child's emotional and physical well-being could be endangered if her husband Terry had full access and visitation.

Chauna also claims that Terry was previously under the care of a psychiatrist and had demonstrated problems controlling his anger and temper. She requested that Terry be evaluated by a psychiatrist to determine whether he was suitable for access to the child, according to documents.

The couple is facing murder charges for the death of John Hernandez, a case that has been getting national attention.

Investigators said Hernandez and Terry got into an altercation outside a Denny's restaurant on May 28 in Sheldon, an unincorporated community in northeastern Harris County.

The Harris County Sheriff's Office confirmed that sometime during the fight Chauna, who was off duty, arrived to meet Terry. She noticed what was happening and tried to restrain Hernandez, witnesses said.

Forensics examiners have since ruled his death a homicide, saying he died from anoxic encephalopathy or lack of oxygen to the brain, due to strangulation with chest compression.

A week later, harrowing eyewitness video emerged that gave investigators - and the public - a closer view of the melee that eventually claimed Hernandez's life.

On Tuesday, a judge set their bond conditions, ordering that the two have no guns, no contact with the Hernandez family and will undergo random urine tests while out on bond.

Meanwhile, the Hernandez family has filed a civil lawsuit against Chauna and Terry. They are asking for $1,000,000 in damages, hoping the money would help to take care of Hernandez's daughter.
Related topics:
texaslawsuitu.s. & worlddeadly dennys fightman killed
Copyright © 2020 KTRK-TV. All Rights Reserved.
RELATED 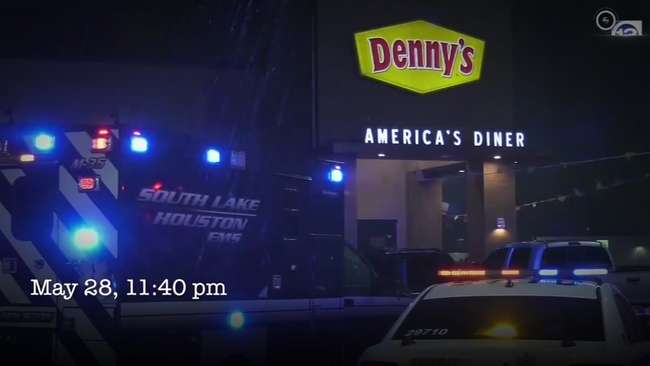 What we know about man, deputy involved in deadly Denny's fight