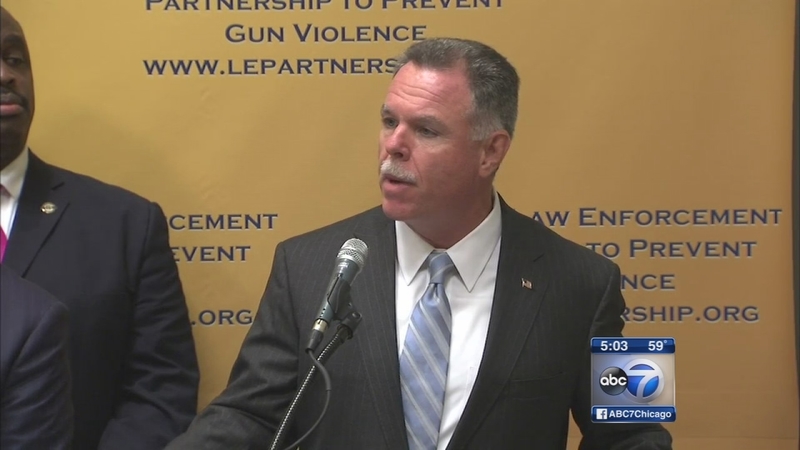 CHICAGO (WLS) -- More than 14,000 law enforcement officials from around the country are in Chicago on Monday for the annual International Association of Chiefs of Police conference, which has drawn protesters all weekend.

The conference, which is being held at the McCormick Place, aims to showcase different crime-fighting tools to fight violence. It is the largest conference of its kind.

As Chicago endured yet another deadly weekend of gun violence, Chicago police Supt. Garry McCarthy stood with police chiefs from around the nation and called for national background checks for anyone who purchases a gun. The National Law Enforcement Partnership to Prevent Gun Violence has been calling for the background check to help prevent gun violence for years, even though Congress has failed to act.

"We are not going to relent," McCarthy said. "This is too important. Americans are dying and we need to do something about it."

When asked about the strong influence of the National Rifle Association, McCarthy said police chiefs can't control special interests; they can only give the public the facts about how many people die from illegal guns every year.

According to the FBI, 50 of the nation's largest cities, including Chicago, have seen an increase in homicides and shootings in 2015. Speaking at the conference, FBI Director James Comey says that increase may have to do with reluctance.

"Maybe something has changed in policing, in today's YouTube world our officers are reluctant to get out of their cars and do work to control violent crime," Comey said.

McCarthy disagrees. He says if his officers were reluctant then gun arrests would not be up by 25 percent in 2015. McCarthy says reducing crime is also about friendlier policing, and that for the past four years Chicago officers have been trained to build trust with the community.

"We went about training the entire department in how to treat people fairly, be neutral and give people a voice," McCarthy said.

McCarthy says the strategy is working as complaints against Chicago police are falling. The conference ends Tuesday with a speech from President Obama, who will talk about gun control.