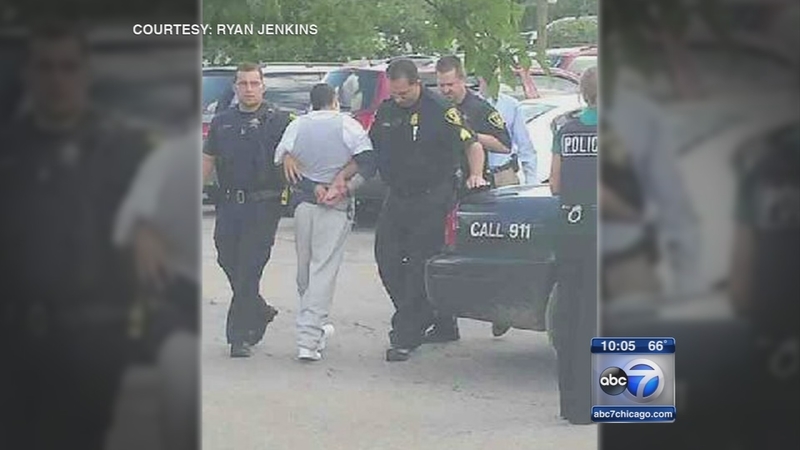 ELGIN, Ill. (WLS) -- A prisoner who escaped from the Elgin Mental Health Center on Wednesday morning has been found.

Jesse Vega's brief period of freedom ended about 4 p.m. Wednesday, not far from where it began. But in that time, Vega was able to find a change of clothes and remove the handcuffs from from one wrist, and get in a cab he thought was bound for the airport- though he had no identification and no money. Elgin police are thanking agencies from several surrounding areas for helping in the search, but ultimately, they credit two alert citizens for helping them capture Vega.

On Wednesday night, Vega has a new mug shot and is facing new charges, thanks in part to alert cab driver, Aaron Dunbar, who recognized Vega as the suspect police had been looking for all day.

"He wants to go to the airport, he has nothing but sweats on and no bags. That already looked suspicious," said Dunbar.

Vega escaped police custody while being transferred from the Elgin mental health hospital to the Lake County Courthouse in Waukegan, where he is facing charges for allegedly assaulting his girlfriend and fracturing her skull. While police warned residents that Vega could be armed and dangerous, he apparently spent some time hiding in this small basement entryway in the neighborhood.

"I lifted this up, and he ran that way and my mother ran that way. And that's when he yelled for the cab," said Joseph Heck Jr., witness.

Heck's father called 911 while Vega ran down the street and hailed Aaron Dunbar's cab. But Dunbar says he stalled for time, insisting on payment before taking Vega to the airport. Dunbar pulled into a parking lot a block away while Vega tried to come up with the money, giving police enough time to respond.

Surveillance video at 7:30 a.m. Wednesday morning showed a man sprinted from a van that had pulled into a nearby gas station and a man in uniform chasing him. Around 8 a.m. a search began, SWAT and tactical teams fanned out into the neighborhood near Seneca and Dundee.

While the manhunt was underway, Elgin police warned the public not to engage the escapee if they saw someone who fits his description, but to call 911 immediately and give them the location instead.

Vega is scheduled to appear in court Thursday.