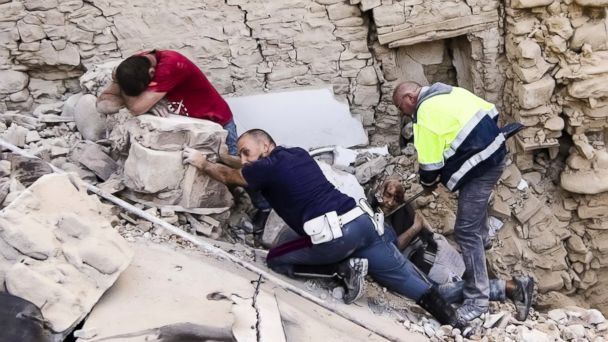 Residents of picturesque mountain towns found themselves sleeping in cars and tents Wednesday night after a harrowing day of searching for survivors and assessing widespread damages, even as continued tremors shook the area.

A powerful 4.7 magnitude aftershock hit the area at around 5 a.m. local time Thursday, according to the United States Geological Survey (USGS).

Tremors were felt as far away as Rome, more than 100 miles from the quake's epicenter.

Italy's earthquake institute reported 150 aftershocks in the 12 hours following the initial quake, the strongest measuring 5.5 on the Richter scale.

The Italian government allocated 234 million euros to the search and recovery effort on Thursday, as glimmers of hope buoyed rescue teams who worked through the night in a desperate search for people trapped under collapsed buildings.

Early Thursday, firefighters pulled a 10-year-old girl alive from the rubble in the town of Pescara del Tronto.

"You can hear something under here. Quiet, quiet," one rescue worker said, according to the Associated Press, before soon urging her on: "Come on, Giulia, come on, Giulia."

Cheers broke out when she emerged from the wreckage.

Still, the death toll continued to climb as more and more bodies were recovered.

"Unfortunately, 90 percent we pull out are dead, but some make it, that's why we are here," said Christian Bianchetti, a volunteer from Rieti who worked through the night in Amatrice.

The mayor of Amatrice expressed concern for the approximately 70 guests staying at the town's Hotel Roma, only a handful of whom have so far been pulled out. The historic town's population swells with visitors in the summer months, likely adding to the quake's toll.

Italy's health minister, Beatrice Lorenzin, visited the devastated area Wednesday and noted that many of the victims were children.

Italian Premier Matteo Renzi also visited the zone Wednesday, greeted rescue teams and survivors, and pledged that "No family, no city, no hamlet will be left behind."

The U.S. State Department has so far not reported any U.S. citizen casualties, saying that the U.S. Embassy was working to verify the welfare and whereabouts of U.S. citizens in the area.

In the town of Amatrice, the damage was so extensive that Mayor Sergio Pirozzi said, "The town isn't here anymore."

The State Dept. advised U.S. citizens to avoid the region of central Italy near the towns of Amatrice, Accumoli, Arquata del Tronto, and Pescara del Tronto.

"Many roads have been blocked," the State Dept. said in a statement, noting that "numerous aftershocks have already been felt throughout the region, and there is the potential for further aftershocks."

The central Apennine region, a mountainous area of central Italy, has had several significant temblors, according to the USGS.

In September 1997, a 6.0 magnitude earthquake in the area killed 11 people and injured more than 100, destroying approximately 80,000 homes in the Marche and Umbria regions.