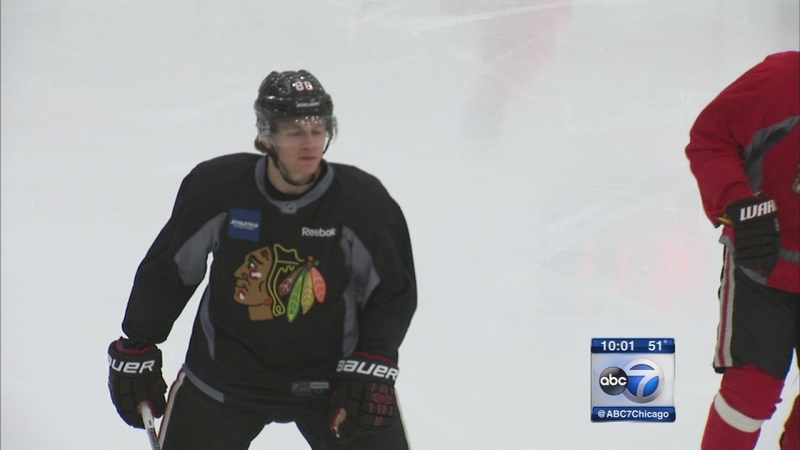 CHICAGO (WLS) -- Reactions are coming in Sunday from teammates, fans and Patrick Kane himself following a report published Saturday that the Chicago Blackhawks star will apparently not face criminal charges after a Buffalo, N.Y., woman accused him of rape in August.

Kane spoke for the first time Sunday since the published report says he will likely not be charged with raping a woman in Buffalo. It is the latest twist in bizarre set of happenings as the investigation into the alleged attack continues.

"I'm not really going to say much about it until the District Attorney addresses everything and he makes his decision," Kane said after a team practice Sunday. "Those are just reports and not really any facts or anything so far."

While the Erie County District Attorney and an attorney for Kane's accuser declined to comment, a few of his Blackhawks teammates did.

"Glad to see that, but it's not over unit it's over," said Blackhawks center Andrew Shaw. "We've always got his back. He's our family and we're always going to be there for him."

The allegations first surfaced three months ago after a woman accused Kane of raping her in his Hamburg, New York, home on August 2 after she says the two met in a bar.

Kane has maintained his innocence and was never arrested.

Word that the charges could be dropped was good news to hockey fans dining at the Palace Grill.

"I'm very happy to hear it, very happy," said Blackhawks fan Alden Clendenin. "I think it's good for the Blackhawks. It will be good to clear his name."

The possible dismissal comes after the victim's mother was accused of setting up an elaborate hoax involving a fake rape kit.

Kane's' attorney Paul Cambria said Sunday he has not heard a word from the District Attorney's office, but if the rumors are true and his client is in the clear, that is what he was pushing for all along.

"I've taken the position since day one on all of this," Cambria said. "Our position is I didn't feel there should be any charges. That's our goal. That's my job."

Even if criminal charges are not filed there is still the possibility of a lengthy and expensive civil suit. Cambria says he's prepared to represent Kane if that is the case.

"There's 54 lawyers in my office we do everything and I personally be involved, sure," he said.

"I told the father they should countersue these women now to go up on stage in front of the whole world and tell everybody that this was an extortion plot to try to get money out of him, to try to clear his name," Lemperis said.

Kane says that hockey has been his diversion from the distraction of the accusations, as he hopes to not only bring another Stanley Cup championship to Chicago, but also to clear his name.

"It's seems like it's been a long time," Kane said. "It's been about three months, but I obviously am looking forward to any type of conclusion."

There is no word on whether any announcement about criminal charges will come on Monday or later in the week.