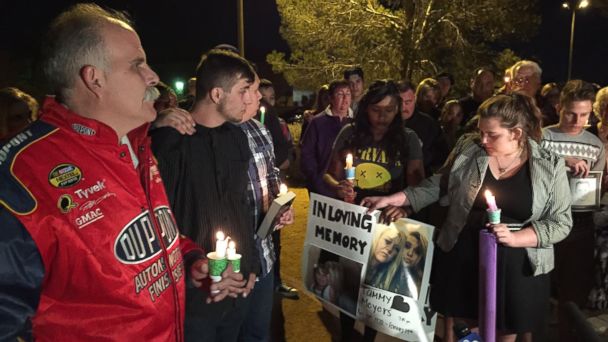 A woman who was fatally shot after an apparent "road rage" incident went looking for the suspect with her armed son, police said, and was likely not followed home immediately after the street encounter as was previously thought.

Police now believe it was only after Tammy Meyers and her 22-year-old son went out and found the suspect Thursday that they were apparently followed home, said Lt. Ray Steiber, who is in charge of the homicide section at the Las Vegas Metropolitan Police Department.

"There was a volley of rounds fired from that vehicle," Steiber said at a news conference Tuesday, adding that the son then returned fire. "All indications ... are that this unknown person had fired shots first."

Meanwhile, a candlelight vigil was held Tuesday evening outside Walter Johnson Junior High School, where Meyers was giving her 15-year-old daughter a driving lesson in the parking lot before the encounter.

"I did what I had to do to protect my family," Brandon Meyers, the son who fired at the car, said at the vigil. "And I'd do it for anyone I love."

The daughter, 15, told the 75 or so people at the vigil: "I was in the car with her. There's so much I can say about my mom. My mom was protecting me that night and she was doing what any mom would do. She was my everything, my best friend. She did everything she could possibly do to protect me and I love her so much."

Steiber said the homicide section took over the case from the violent crimes section after Meyers died, and is still reviewing the timeline and other aspects of the case. He said the adjusted timeline was heavily based upon the accounts of the daughter and son who were in the car with Meyers that night.

"What I think everybody wants is an accurate timeline and an accurate depiction of what occurred," Steiber said.

Police now believe there was no collision, as had been previously reported, before Myers and her daughter were verbally confronted by the "road rage" suspect.

Instead, Steiber said, after Meyers and her 15-year-old daughter completed a late-night driving lesson in a school parking lot, Meyers took over driving duties and was headed home. Once on the road, a four-door silver or grey sedan pulled up aggressively behind Meyers' car and then tried to pass, prompting Meyers' daughter to reach over and honk the horn.

The sedan then stopped in front of Meyers' car and someone got out, Steiber said.

"From the information that we had gathered at this point, we don't believe that Ms. Meyers or her daughter ever said anything to the person or persons they were involved in the road rage incident with," Steiber added.

"Meyers sped past the male ... and she continued on her way," he said. "Mrs. Meyers is scared, she's upset."

Once home, Meyers asked her daughter to fetch the 22-year-old son, Brandon, who armed himself and joined Tammy Meyers in the car, Steiber said. The pair went looking for the "road rage" suspect and found him, before losing track of him again, Steiber said.

The suspect has been described by police as a white male, about 25 years old, 6 feet tall and 180 pounds. He has "dirty blonde hair worn in a spiked style and has hazel or blue eyes," police have said.

"We have not yet identified a suspect pertaining to this murder," Steiber added today.

After losing track of the suspect, Meyers and her son returned home again, Steiber said, but soon the suspect vehicle pulled up, gunfire erupted and Meyers was fatally wounded.

One of Meyers' four children spoke with ABC News, expressing shock after her death.

"We're not used to waking up and not seeing our mom," Matt Meyers, 19, told ABC News.