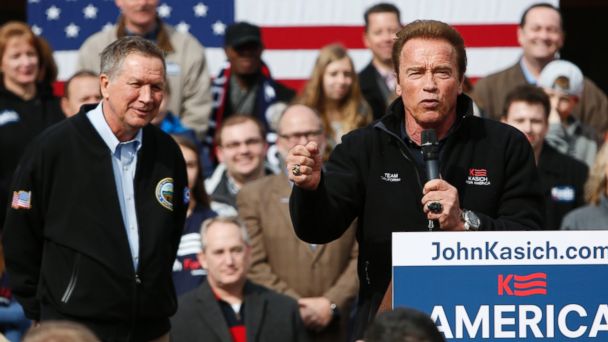 COLUMBUS, Ohio -- Arnold Schwarzenegger, the movie star and former California governor, endorsed Ohio Gov. John Kasich today for the Republican nomination for president, saying his experience in government made him "an action hero."

"He kicked some serious butt," Schwarzenegger said of Kasich, who served in Congress for 18 years. "He was an action hero when he went to Washington."

Schwarzenegger, a fellow Republican, told hundreds at a botanical garden and conservatory that he first became friends with Kasich in the 1980s, when he was in Ohio hosting his annual "Arnold Sports Festival" body-building and fitness expo. The two have been friends since, and the former "Terminator" star carries out philanthropy work in the Buckeye State, too.

"When he ran for governor, I said to him, 'I'll be back,'" Schwarzenegger said.

Schwarzenegger wore a Kasich campaign jacket, while the presidential candidate put on a jacket with "Made especially for John Kasich Governator II" on it that the actor gave him.

Schwarzenegger last month held a tele-town hall with Kasich but stopped short of formally backing Kasich's run. He did, though, speak at a fundraiser for Kasich in California in October.

"We need John Kasich to now take charge and be at the White House," Schwarzenegger said today. "And this is why I endorse John Kasich, our great governor, to be our Republican nominee, and to be the next president of the United States of America, the greatest country in the world."