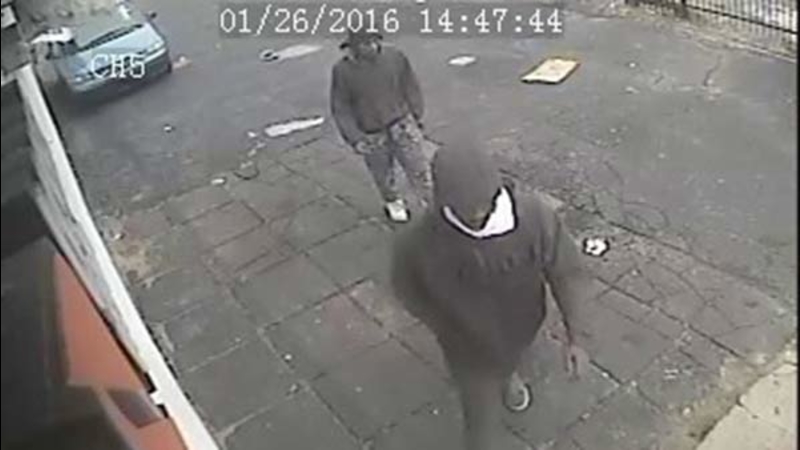 GARY, Ind. (WLS) -- Police are searching for two suspects after a security guard was shot inside a cell phone store in Gary Tuesday afternoon.

PHOTOS: Suspects sought in Gary store shooting
PHOTOS: Suspects sought in Gary cell phone store shooting
Gary police released surveillance images showing two suspects wanted in connection with a shooting at a cell phone store on Jan. 26, 2016.
Police said they responded to the ABC Pagers and Cellulars store in the 4200-block of Broadway around 2:30 p.m. and found the security guard with a gunshot wound. The security guard is hospitalized in serious condition.

Police released images from surveillance video taken from the store, which has since reopened. Police said the man with the white cloth around his neck was the shooter.

Store employees said off-camera that two men entered the store and the gunfire was immediate. They said the guard was wounded in the side beneath the armpit, and the bullet came out his shoulder area.

People who work at a law office across the street were stunned.

"We're shocked because we've been here 35 years and we've never had a problem, especially in broad daylight. I see that fellow walking around the store - I believe he's armed, I'm not sure - and we never have any issues here during the day," said Patrick Young, an attorney.

The motive for the shooting - whether it was an attempted robbery or the guard was targeted - is still unclear.

Anyone with information on this incident is asked to contact the Violent Crimes Division at 219-881-1210 or the Crime Tip Line at 866-CRIME-GP.