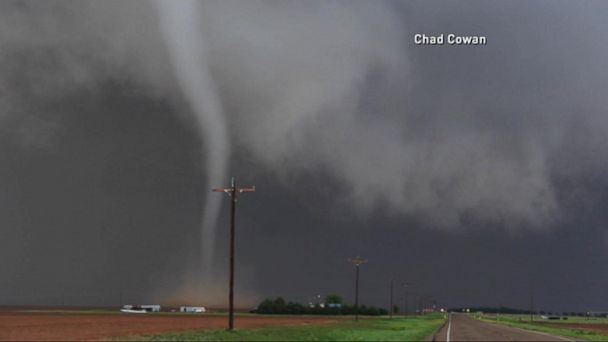 ABCNews
By DAN PECK
At least one person is dead after two tornadoes touched down in North Texas Saturday evening, produced by storms that rolled through from eastern Colorado to Arkansas.

Texas state official Phillip Truitt said one person died and three others were injured in a tornado that hit 3 to 4 miles south of Cisco, Texas.

Fences, trees, power lines and a lot of structures were heavily damaged, and there was localized flooding in the area, Truitt said.

The storm that brought the tornado was accompanied by hail as large as oranges, Cisco Fire Department spokesman said.

Eastland County Judge Rex Fields said the deadly tornado caused "five miles of destruction" as it tore through farmland. He said the tornado tore homes "into pieces and blown them out into pastures."

As of 8:30 p.m. Saturday evening, there were nearly 50 severe weather reports, with 19 of them being tornadoes.

A second tornado touched down in Burkburnett, north of Wichita Falls. Officials said it was too early to determine the extent of damage or whether there were any injuries.

Storms on Friday had rainfall rates that exceeded 3 inches an hour in parts of Texas and Oklahoma.

Through Saturday night, the threat for severe storms will continue across much of the Plains, bringing large hail, damaging winds, and a few tornadoes.

On Sunday, the threat for severe weather will shift slightly to the east, affecting millions of people from Des Moines down to Dallas. The main threats from any severe storms that develop on Sunday will be large hail and strong wind gusts. A few tornadoes will be possible as well.

Flash flooding remains a big concern as well across the central and southern Plains as very heavy rain continues to fall from the numerous stronger thunderstorms passing through. Flash flood watches remain in effect for parts of Kansas, Oklahoma, Texas, Missouri, and Arkansas throughout the weekend.