Shark 'Came Out of the Water' and Bit Off Teen's Arm: Witness 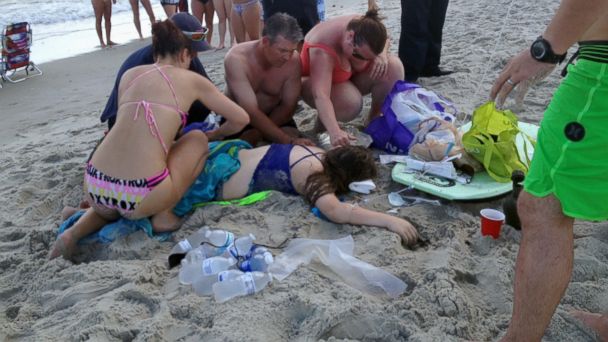 An eyewitness described the moment when the second shark attack took place off a North Carolina beach on Sunday, describing how the shark breached the water.

"He looked like he was waving at his friends," Randy Milligan said of the unidentified 16-year-old boy who was attacked. "Then the shark just came out of the water and like you snap your fingers -- bit his whole arm off."

Milligan told ABC News that the shark was large and was able to fit the majority of the boy's left arm in one bite.

Dr. Borden Hooks, who spoke about the boy's condition at a news conference this afternoon, confirmed that he had to have his left arm amputated above his elbow.

"I would imagine to inflict that kind of damage it must be a relatively large shark," Hooks said.

The family of the other victim, a 12-year-old girl, would not publicly disclose any details about her attack but Town Manager Tim Holloman confirmed to ABC News that she lost part of her arm. County officials said earlier today that both victims are in stable condition.

The two teens, whose names have not been publicly released, were in waist-deep water off Oak Island, North Carolina, about two miles apart when their respective attacks took place.

County authorities still have no idea where the shark, or sharks, are now but have been using helicopters and boats to patrol the areas near the attacks.

"We spotted one shark that was estimated over 7 feet long between the locations of the two bites earlier, and then we spotted another one off, down a little further south, about the same size," Brunswick County Sheriff John Ingram said at a news conference this morning.

There have been shark spottings in the area today as well. Monda Laughlin Hussey, who regularly goes on walks on the beach near Holden Fishing pier, which is about three miles from the site of one of the attacks, too a photo of two sharks that she saw this morning at around 10:30 a.m.

The sharks that she saw were swimming "maybe 10 to 15 feet off shore" where the water "wasn't higher than waist-high."

"I believe they were Hanging in that area due to the fisherman. One of the fisherman even caught what looked like a baby shark right around 10:30 when we first got out there. They threw the baby shark back in," she told ABC News.

Oak Island Fire Chief Chris Anselmo said today that they have no way of knowing whether one or multiple sharks was responsible for the twin attacks on Sunday afternoon.

The first attack happened at around 4:12 p.m. when the 12-year-old girl was attacked by a shark while she was swimming on a beach in Oak Island, authorities said.

About an hour and a half later, the 16-year-old boy was attacked in the waters of a beach about two miles away.

Neither of the teens have been publicly identified, and Watts said that both wounds were life threatening but they were out of surgery Sunday night and said to now be in stable condition. The county officials would not confirm if either of the victims had to have limbs amputated, but the bystanders who called 911 said in both instances that their limbs had been bitten off.

"Honestly they both have a long road ahead," Watts said.

Watts said that other beachgoers were vital lifesaving factors as they helped administer aid before emergency responders got to the scene.

"The bystanders, to go ahead and start the process of stopping the bleeding, that was the biggest concern with these patients," Watts said. "Without that, we would have had a different outcome."