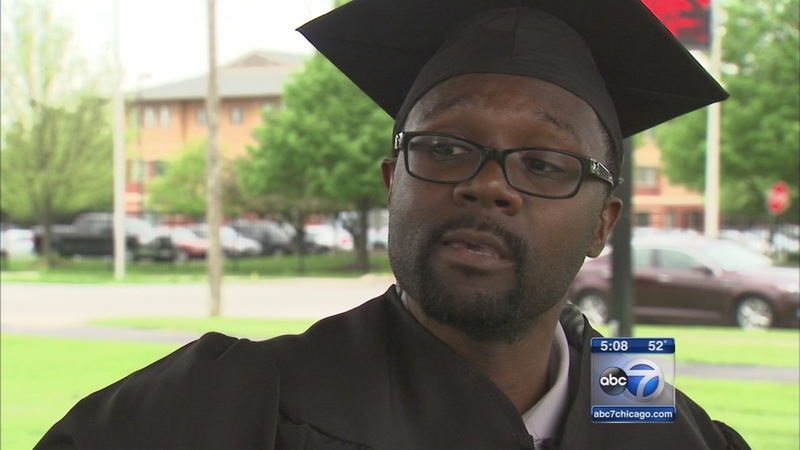 CHICAGO (WLS) -- Nine years ago, when Wilbert Taylor, Jr. was 19-years-old, he was shot in the head and paralyzed. He was in Chicago, on break from Southern Illinois University.

The shooting left Taylor in need of a wheelchair and he was told he would never walk again. Now 28 years old, he was eventually able to regain most of his movement and his strength and Thursday he will walk down the aisle for the graduation ceremony at Chicago State University with a degree in criminal justice.

"I worked really hard and survived but I still had the will to do the things I had set out to do," Taylor said.

According to Taylor, on the night of July 5, 2005, he was leaving at party in the 9600 block of South. Michigan. He was helping his friend, a DJ, pack up when a car drove by and opened fire.

"The bullet actually went in the back of my head and came out in the front," he said. "I was completely paralyzed on my left side and in a coma."

Doctors told family members he would not walk again, if he survived.

"It was said they had never seen anyone recover from such an injury," he said. "To learn how to get dressed with one arm and half of my body, it hurt me a lot. Having to depend on someone else was very humbling,"

No one has been arrested for Taylor's shooting. At first he was very angry and depressed, but with the help of his family he was able to let the anger go and flourish. Now he wants to motivate others to do the same.

Originally Taylor wanted to be a journalist, but after the shooting he decided to specialize in criminal justice. He is troubled by the violence in Chicago and wants to make a difference

"I now want to reach out and help young people," he said. "I volunteer with the Black Star and I hope my story can stop the violence and help someone else, and let them know if you stay determined you really can do what you want, if you put your mind to it."