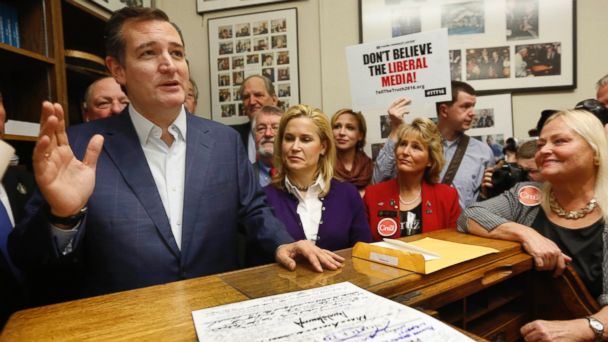 CONCORD, N.H. -- It costs a thousand dollars to file for the New Hampshire primary. But it doesn't cost anything to lodge an official challenge to get someone kicked off the ballot.

That's what happened Thursday at the New Hampshire state house, not once, but twice, as Bernie Sanders and Ted Cruz each received challenges to their New Hampshire bids.

For the Sanders camp, the development is largely an expected one. The Vermont senator has identified as an Independent for much of his political career, and declined the nomination from the state Democratic Party in both of his U.S. Senate runs. He has been embraced by the Democrats this year, though, and was accompanied by party representatives as he filed.

That's not good enough for Andy Martin. A New York Republican who's running a small presidential campaign of his own, Martin filed a complaint challenging the legality of Sanders' bid.

"If you go to [Sanders'] website, he says he's the longest serving independent" in Congress, Martin said at a press conference in Concord. "If you identify as an Independent in Washington and Vermont, how can you be a Democrat in New Hampshire?"

Ted Cruz handed over his own paperwork later on Thursday. Just minutes later, two different protests were submitted. The petitioners said Cruz should be ineligible to be president because he was born in Canada. Each petition invoked the U.S. Constitution, which states the president must be "a natural born Citizen, or a Citizen of the United States."

"He is not a natural born citizen, as he was not born in the United States," both documents read.

Cruz was born in Calgary in 1970, where his parents had moved to work in the oil business. His father was a Cuban national at the time, and became at naturalized American in 2005. His mother is an American from Delaware. Cruz's campaign declined to comment on the challenge.

This isn't the first time the citizenship question has been raised. Arizona Senator John McCain and former Michigan Governor George Romney (father of Mitt Romney) were each born in foreign countries while their parents worked overseas. Neither was prevented from seeking the GOP nomination.

Sanders' team, which has been fielding questions on his party membership for months, expressed confidence that the senator's eligibility would be upheld.

"We need to see the challenge, but regardless of what is says, we're prepared to respond," Sanders' New Hampshire communications director Karthik Ganapathy said in a statement. "For our part, we're going to focus less on frivolous challenges that undermine the gravity of the New Hampshire primary, and more on the issues that affect everyday Americans."

All three of Thursday's challenges, along with any others submitted during New Hampshire's filing period, will be considered by the state's Ballot Law Commission on Nov. 24.

"This is what lawyers do," said Martin, after dropping off his challenge to Sanders. "We bring law to government, and they're going to make a decision. I don't know what the decision will be; I don't have anything personal against Bernie."