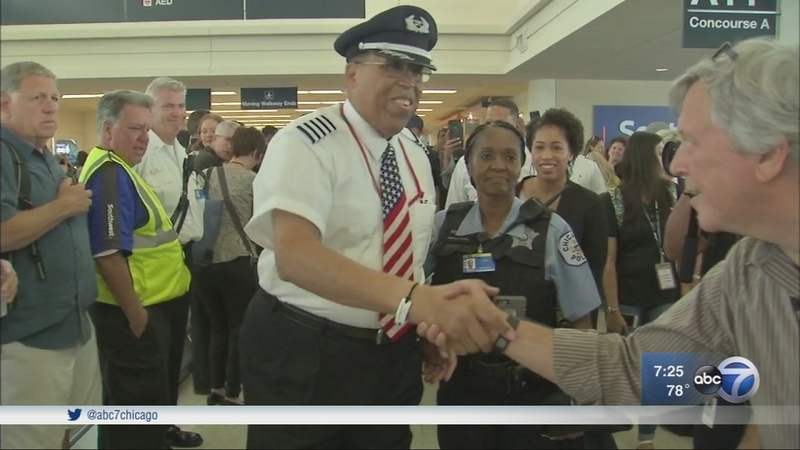 CHICAGO (WLS) -- A trailblazing Southwest Airlines pilot is ready to retire his wings.

Louis Freeman is the country's first African-American chief pilot and was honored in Chicago on Thursday as part of a multi-state retirement ceremony.

After 37 years Freeman is hanging up his captain's stripes.

"It's been an amazing 37 years. I can't believe it came this fast," Stephanie Freeman, his wife, said.

Freeman, who is 65, the mandatory retirement age for the airline, landed what will be one of his final flights, Flight 412 on Thursday, a 737 from Dallas to Chicago.

His plane received a water-cannon salute and Freeman was greeted by fellow Southwest employees whose heartfelt remembrances lined the concourse at Midway Airport.

"This is final now and it just hit me that no more," she said.

Always the trailblazer, Freeman joined the airline in 1980 as Southwest's first African American pilot and then in 1992, he became the first black chief pilot of a major U.S. airline.

"Because of Lou, that's why I'm able to do what I do and I hope to pave the way for somebody else in the future," Captain John Addison said.

"He really an inspiring person, really down to earth, really wants to help others," Patty Greene, community affairs manager said.

From humble beginnings in his home state of Texas, Freeman experienced an illustrious career.

He not only broke the color barrier in ROTC, but also flew the remains of Rosa Parks' to her final resting place while managing to volunteer for the Tuskegee Airmen and while inspiring others like 18-year-old Brody Burnell who said Freeman encouraged him to become a pilot when he was just six.

"I just graduated high school last week and I get my commercial pilot's license in two months or so, Burnell said.

On Thursday afternoon, as the next phase of his life takes flight, Freeman said he hopes he's proof that anything is possible.

"You couldn't ask for a better day," Freeman said.