State of emergency declared for 40,000-acre valley fire in Calif. 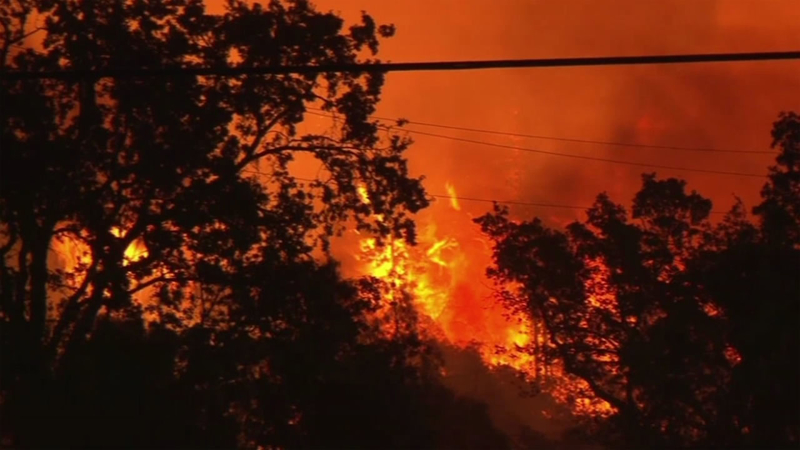 LAKE COUNTY, Calif. -- Governor Brown has declared a state of emergency in Lake and Napa counties due to the effects of the explosive 40,000-acre Valley Fire burning in Lake County. Entire communities have been devastated and thousands have been forced to evacuate.

Several structures have gone up in flames and hundreds more are threatened.

Cal Fire says that over 1,000 firefighters are battling this blaze but their focus is on evacuating residents.


The communities of Cobb is burning so fast that it is challenging firefighters' ability to warn residents of the danger.

Extraordinary video from the community of Middletown shows house upon house burning, all you can hear is the crackling of the flames.

We won't know the extent of the damage in Middletown until later Sunday, but it is definitely substantial.

We've received word that the flames have destroyed at least one school -- Middletown Christian School, a small private school that serves students from kindergarten through high school.

Many are sleeping in cots and others are in their cars and tents. The fire has not slowed. We have not received any word yet about how many buildings have been lost.

The communities of Cobb, Middletown and Hidden Valley have suffered extensive damage.

A lot of people are making their way to the evacuation center after spending the night on side roads escaping the fire.

One evacuee, who worked for the forest service clearing fire lines for years, had the best candid description of the Valley Fire. "It was one of the worst things I've ever seen. It looked like you don't want to visit Hell, you were nearly in it," Roger said.

Sue Hamilton lives on West Road in Milton and she came down Highway 29 within the last hour. "Nothing but fire and ash. The ash is so thick you can't even imagine. It's like a movie, a horrible movie."

Hamilton says she has never been without a home and this is devastating for her.

The destruction of the fire cannot be overemphasized.

Many houses were lost, some are spared. At this point Cal Fire is just trying to get people out and protect as many homes as they can. We have not been given any official count related to structures lost.

We're hearing from evacuees that gas stations in Cobb Mountain and Hidden Valley caught fire and exploded as well as propane tanks in Middletown.

Evacuees are getting calls from people who are still in Lake County and the fire's path is taking many turns.

Cal Fire PIO Daniel Berlant spoke with ABC7 News about what to expect Sunday in the fire zone.

Berlant said he hopes for the best but cautioned against any ideas of a quick result. "We're hoping that if the winds do die down just a little bit, if we continue to see cooler temperatures, then we'll be able to really make some good progress to get ahead of this fire. But as we've seen from fire after fire, it's taken days and days and days of hard, tireless work to try and slow down a fire like this. So there may be more communities in the near future and that's what we'll be working with the sheriff's department to try and do as much as we can to those residents if this fire does change direction or does grow in a different, towards a different community."

The Lake County Sheriff's Office and Cal Fire have issued a mandatory evacuation orders for the following:

Bob Rider is one of those evacuees who shot video on his phone after he got out. He told ABC7 News he, his wife, three young boys and dog "ran for their lives" from their home in Hidden Valley Lake.

"The sound of this fire was that of a jet plane in flight. You could see fire advancing. It was incredible. We weren't evacuating carefully and cautiously, we were fleeing," he said.

Rider says they only had time to grab a couple important items before loading up and leaving.

He believes his home and photography business have been destroyed.

Four firefighters, among the first on the scene in Lake County, needed to be rescued after being trapped by the flames.

They belong to a helicopter crew that gets flown into the most dangerous areas to try to stop the flames.

All of them suffered second-degree burns.

"These kind of events are very unusual. They don't occur very often. So when they do, obviously we go in and we investigate, try to figure out what happened. Especially in this situation, so we can prevent of create training so that it would never occur again," Lynne Tolmachoff said.

"When the fire is on and you have to make life or death situations, it's very traumatic to the firefighters," Mike Lopez said.

Other firefighters have stopped by the trauma center near the state capitol to check on them and their families.

The president of CAL FIRE Local 2881, tweeted that he visited the for injured firefighters and said they are all expected to make full recovery.

For more stories about the wildifires burning throughout California, click here.


For more stories about the wildifires burning throughout California, click here.