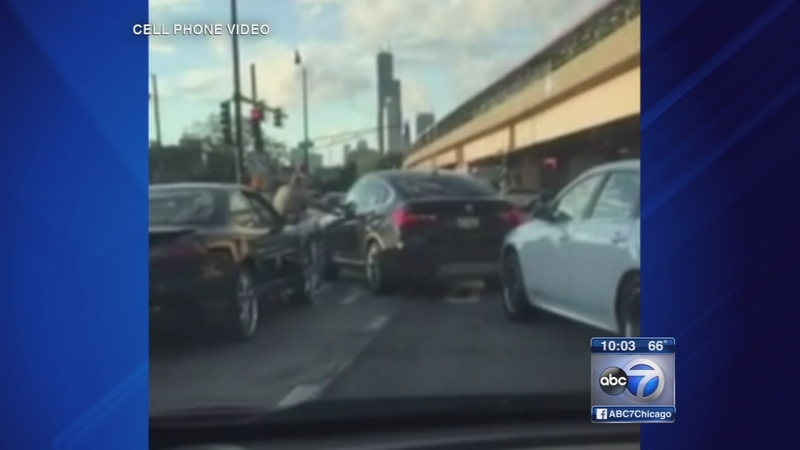 According to state police, a trooper spotted the black BMW sports-utility vehicle that had been reported stolen at gunpoint in Chicago on Saturday at about 6:50 p.m. The teenage boy was inside the stolen vehicle, police said. After trying to stop the SUV, it took off and police pursued it to the Chinatown feeder ramp, where it became stopped in traffic near the CTA Red Line stop.

As troopers approached the SUV, the driver attempted to run a trooper over and the trooper opened fire on the SUV, police said. The SUV then left the scene before it stopped at 11th and Wabash Avenue in the South Loop, where four people got out and fled on foot.

Three suspects were taken into custody and a fourth escaped. The fourth suspect, the 15-year-old boy, was located at Stroger Hospital recovering from a gunshot wound. His injuries do not appear to be life-threatening, police said.

"I'm still shaking right now because I've never seen this, I've never witnessed such thing before. And I was panicking at the time," said witness Mohammed Al Abdul-Salim, who captured the GoPro footage.

Al Abdul-Salim and Omar Al-Marmari were outside the Chinatown CTA Red Line stop when they saw the black BMW SUV pulled over on the street as officers approached with guns drawn.

That's when they pulled out their GoPro.

"I saw the driver raise his hand, but then he just kept moving. He ran away," Al-Marmari said.

One of the officers fired at the SUV, shattering the vehicle's window, both men said.