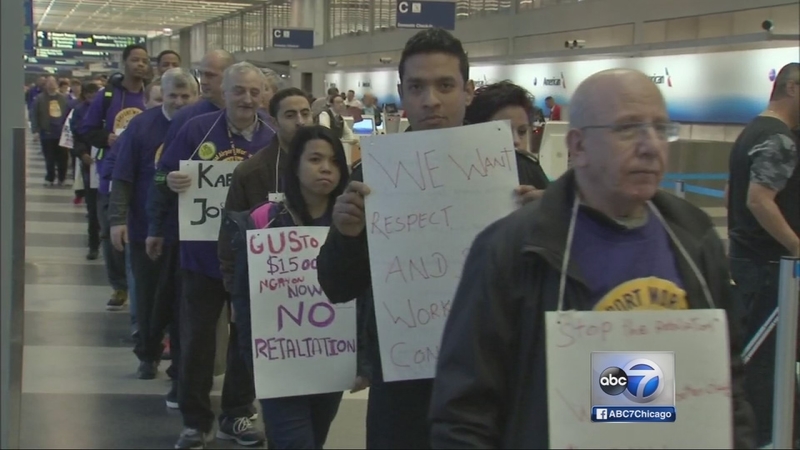 CHICAGO (WLS) -- Hundreds of employees at O'Hare International Airport are on strike Thursday. They want higher wages, benefits and enhanced security in the wake of recent airport attacks overseas.

Baggage handlers, aircraft cabin cleaners, custodians, wheelchair attendants, non-TSA security officers and more walked off the job around 10 p.m. Wednesday. O'Hare was one of nine airports across the country affected by the 24-hour strike.

"We are doing jobs that make the airport run. So I feel we deserve to make a living wage of $15 because we are making the airport run every day," said Raqu Brito, who has three airport workers in her family.

Non-union workers are also participating in the strike. They are employed by three contractors, Universal Security, Prospect Airport Services and Scrub, Inc., hired by the city and the airlines. ABC7 reached out to the contractors for comment, but they have not yet returned those calls.

The operations workers returned Thursday morning and silently walked in a single-file line through the airport. Once outside, hundreds of people shouted, "Fight for 15!"

"Minimum wages, really, we get paid. We want fair share of ours, you know. He's supposed to give us a pay raise every yearly. Haven't seen in five years," said Sadaf Subidano, who has worked for Universal Security for 20 years.

"Airports are economic engines for cities. There's no doubt. We know that the airlines are profitable - very profitable, actually - and that needs to be shared," SEIU Local 1 President Tom Balanoff said. "I don't think it will lead to that high of airfares. I don't think it would take too many cents on every ticket at O'Hare to probably provide everybody with not only $15 an hour, but also health care."

Another big concern is health care. They don't have benefits. If and when a person in their family gets sick, they have no safety net.

"Nothing for benefit here. No vacation. No sick. Nothing," said one employee, who has worked at O'Hare for four years.

O'Hare officials said in a statement they don't think passengers will experience any disruption in their travel due to the one-day strike.