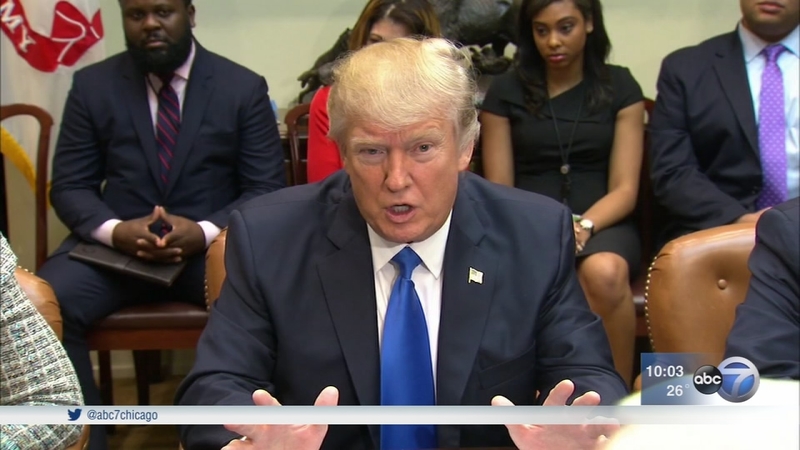 County Commissioner Richard Boykin said he reached out to the White House proposing a plan for a federal task force. He said he got a response and is optimistic a meeting is next.

"We need federal government leadership here, and we need somebody from outside to come in," Boykin said.

Boykin shard his plan for an elite task force.

"I think through a federal task force where you have county, state and federal stakeholders, as part of that coming up with a solution coordinated by the federal government, I think we can get some safer communities," he said.

Trump started today by focusing on Chicago when talking about violence in America.

"We're gonna have to do something about Chicago because what's happening in Chicago should not be happening in this country," Trump said.

When it comes to gun violence and murder rates per 100,000 residents, Chicago is a middle-of-the-pack city, despite all the attention it receives. In response to the comments, Mayor Rahm Emanuel pointed out that violence is not a citywide problem.

"Fifty percent of the homicides are in three districts out of the 22," Emanuel said.

"There is a perception that Chicago is out of control when you compare it to other large cities like Los Angeles and New York," said Rev. Corey Brooks, New Beginnings Church.

"I was recently contacted by some of the top gang thugs in Chicago for a sitdown," Pastor Darrell Scott said.

"The guys that reached out to me, those are the ones who I responded to. And if they want to reach out to the mayor they can. But they didn't call me so I could call the mayor," he said.

"They don't want to continue down the cycle of going to jail and going to the grave early," he said.

"You know, they calls us GDs or Gangster Disciples. But no, we're family," said Lavondale Glass, community activists.

Glass, who is 43, said he has not spoken to Scott or anyone in the Trump administration, but he said the young men in his neighborhood want jobs and want the White House to bypass local politicians and speak directly to them.

Emanuel repeated that the city would welcome more federal resources to combat violence in the few neighborhoods where he said most of it occurs.

"Give these kids a summer job," he said.

"We don't need no social programs, we need jobs, resources. We need a chance to come up with some resources to create jobs, to create a chance," Glass said.

Scott backtracked on his comments Wednesday night, saying sleep deprivation made him misspeak and he had only spoke to one gang leader.

The conversation took place as the Chicago Police Department released its crime statistics for the first month of 2017. Police recorded 51 murders and 299 shooting victims across the city last month.