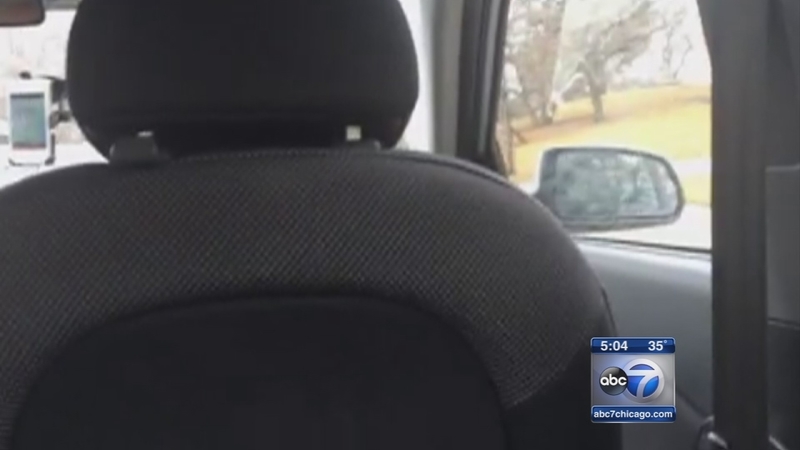 CHICAGO (WLS) -- Chicago police are investigating a woman's claim that she was raped by a driver she hired through Uber. The I-Team looked into those ride-sharing background checks, and Consumer Investigative Reporter Jason Knowles talked to critics who say that the city needs to require more checks.

Ride-sharing companies like Lyft, Side car and Uber are required by the city and the state to perform private background checks, but the union that represents cab drivers says that the research done on cab drivers is more thorough and consistent. This comes after a report just surfaced alleging an Uber driver raped a passenger.

Chicago police tell the I-Team that detectives are in contact with a victim as well as the Uber driver in question about an alleged rape of a female passenger in mid-November.

According to a police report obtained by DNAinfo, the woman was leaving a River North bar when the Uber driver asked her to get in the front seat. The woman says she blacked out and found the Uber driver on top of her in an apartment,then he drove her home.

A 4 a.m. text from the victim to her friend said: "I was just sexually assaulted by my Uber driver and I'm supberb (sic) drunk, but I need someone to remind me to follow through to make sure this never happens again."

"I trust Uber, all my friends use it. I have never heard of anybody personally having a problem," said Julia Frederick.

"I like the idea of a cab because there is a company responsible and if anything were to go wrong with Uber you have no idea who is picking you up," said Alecia Evans.

The union which represents cab drivers at an event Tuesday to increase wages for cabs told the I-Team that it is critical of background checks on ride-sharing programs like Uber.

"There are about 12,000 licensed drivers. Every one of them has undergone a criminal background check that was either performed by the city or by a private company certified by the city in the case of ride share that responsibility is left up to the private companies," said Anders Lindall, AFSME spokesperson.

The city's Department of Business Affairs and Consumer Protection says, "BACP has developed a regulatory plan - including background checks, training, and vehicle inspections - that works to ensure public safety..."

An Uber spokeperson said it screens drivers' federal and county court records going back seven years and uses a multi-state criminal data base and a national sex offender registry screen.

As far as the alleged rape, Uber says in a statement:

"This is an appalling and unacceptable incident and first and foremost our thoughts are with the victim and her family. We immediately removed the driver from the Uber platform when we learned of the incident..."

In May, the I-Team researched cab driver complaints filed by riders and found that in just three months, there were 28 total complaints of physical assault.

And in November 2013, a cab driver was charged with sexually assaulting a female passenger who fell asleep in his cab, so passenger safety is not an issue isolated to ride sharing services.

"This is an appalling and unacceptable incident and first and foremost our thoughts are with the victim and her family. We immediately removed the driver from the Uber platform when we learned of the incident and are cooperating with the Chicago Police Department in the ongoing investigation. We stand ready to assist them however we can to hold the perpetrator accountable." - Jennifer Mullin, Uber Spokeswoman

All ride-sharing drivers undergo a rigorous background check process that includes criminal screenings at the federal, multi-state and county level and a full review of the driver's motor vehicle record.
Link to Uber's background checks: http://blog.uber.com/driverscreening

Criteria for drivers to pass through Uber's screening, going back seven years:
No DUI or other drug related driving violations or severe infractions*
No Hit and Runs
No fatal accidents
No history of reckless driving
No violent crimes
No sexual offenses
No gun related violations
No resisting/evading arrest
No driving without insurance or suspended license charge in the past 3 years